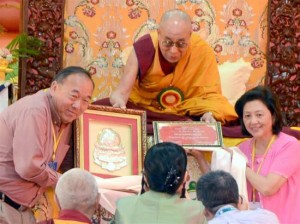 Tibetan spiritual leader the Dalai Lama has once again voiced his concern over the situation in Tibet, saying their language and religion are facing a threat.

“Hardline officials continue to target Tibetan language and religion,” the Nobel Peace Prize laureate told reporters in Rotterdam, in the Netherlands, said a post on his official web site Sunday.

On being asked how long Tibetans could be expected to remain non-violent, the Dalai Lama said Saturday: “If Tibetan Buddhist culture is damaged in Tibet, who knows what will happen.”

“We’re Buddhists and the Buddha advised us not to take refuge in ordinary deities and spirits,” the Buddhist monk remarked on ongoing demonstrations by pro-Shugden supporters against him.

“The demonstrators say I’ve banned this practice, but that’s not so, I haven’t and the monasteries associated with Shugden in South India are evidence of this,” he added.

Later, addressing a gathering of Tibetans, he said: “The spirit of the people in Tibet is very strong… their courage is amazing. And they remain non-violent.”

“We retain a strong dedication to our religion and culture and because of aspirations we have made in the past, we have not let our heritage down. After 60 years, the issue of Tibet is still alive. Awareness of Tibet is still growing,” he said.

The Dalai Lama, Tenzin Gyatso, has been following a “middle-path” policy that seeks “greater autonomy” for Tibetans in China rather than complete independence.

The Dalai Lama has travelled across the world to garner support for “meaningful autonomy” for Tibet, promoting human values and teaching Buddhism.

Beijing accuses him as a trouble-making separatist.

The Dalai Lama has lived in India since fleeing his homeland in 1959. The Tibetan exile administration is based in this northern Indian hill town.