This is the first contact between the two governments after the Indian general elections. 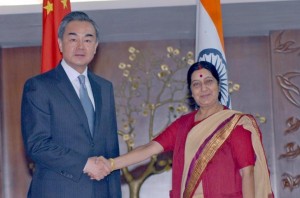 The details of Chinese President Xi Jinping’s visit to India later this year are also likely to be discussed.

Modi had extended an invitation to the Chinese president during his telephonic talk with Wang Li.

The  Chinese leadership is keen to improve relations with India in the face of serious challenges it faces over its maritime disputes with Japan in the East China Sea and with Vietnam, the Philippines and other maritime neighbours in the South China Sea amid a major US military push into the Asia-Pacific.

With banners that read “Prime Minister Modi speak for Tibet”, Tibetans raised slogans and staged a protest at Majnu ka Tilla by the bank of the Yamuna river – an area inhabited by Tibetan refugees – in the national capital.

“We are protesting against the visit of the Chinese minister. Chinese leaders coming to India is not at all right for us,” said Kartan Naam, one of the protestors.