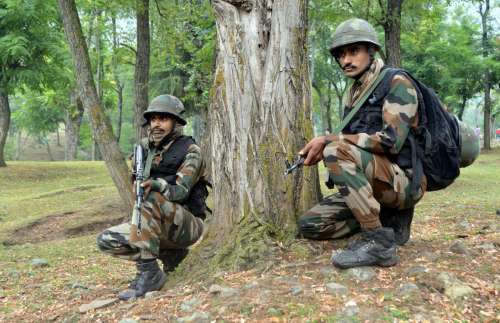 Indian and Pakistani troops clashed again along the Line of Control (LoC) in Jammu and Kashmir, sparking fear at the border and forcing thousands to flee to safer places.

“The firing started at 2.20 p.m. And it is still going on. Our troops have effectively retaliated,” he said. There were no fresh casualties on the Indian side.

Later, the Pakistan Army again opened fire on Indian positions at Hamirpur in Poonch at 4.20 p.m.

“They used mortars and small arms after which our troops retaliated effectively with same calibre weapons,” said Mehta, adding no casualty or damage has been reported on the Indian side.

The latest violation of the 2003 ceasefire along the Jammu and Kashmir border has sparked fresh tensions along the border. Indian officials have said an estimated 20,000 people have fled their homes in border areas.

In Islamabad, Pakistan registered a protest with the UN Military Observer Group in India and Pakistan (UNMOGIP) over the firing by the Indian military.

The Pakistan Army had Monday too violated the truce. The paramilitary Pakistan Rangers have also targeted BSF as well as civilian positions on the border in the last two days.

For the first time, the Rangers and BSF failed to exchange sweets on the border Monday on the occasion of Eid.

Three civilians were injured overnight on the Indian side in firing and mortar shelling by Pakistani forces, police said Tuesday.

“Three civilians were injured in Arnia town,” a senior police officer told IANS in Jammu. He added that the BSF hit back at the Pakistan Rangers.

The firing, which again started between the Rangers and the BSF Monday evening, jad continued Tuesday in Arnia, Pargwal, Kanachak, Ramgarh and other places in Jammu and Samba districts.

Thousands of villagers from the border areas of Jammu, Samba and Kathua districts have fled their homes and moved into makeshift camps.

Journalists who visited the border villages were told that the Pakistani firing was “very heavy”.

BSF officers say that Pakistani forces have intensified attacks on Indian border posts in a desperate bid to give cover to Islamist militants trying to sneak into Jammu and Kashmir.

But Jammu and Kashmir Chief Minister Omar Abdullah denied this, telling CNN-IBN channel that the real reason for the turmoil on the border was the internal situation in Pakistan.

“This Pakistani provocation has nothing to do with attempts to infiltrate militants into Jammu and Kashmir,” Abdullah said.

“It is all due to the internal situation in Pakistan,” he said, referring to the unending tensions between the government of Prime Minister Nawaz Sharif and the opposition.

“Sharif is trying to deflect attention from his internal crisis,” he said.

Abdullah said the Pakistani aggression was a major challenge to the Modi government and simply lodging a protest with Islamabad won’t do.