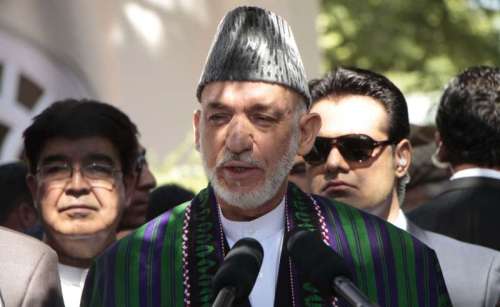 Outgoing Afghan President Hamid Karzai Tuesday said that returning durable peace to his conflict-ridden country depends on the cooperation from the US and Pakistan.

“Peace in Afghanistan depends on America and Pakistan. If they want, peace will return to Afghanistan; otherwise not,” Karzai said in his farewell address to the nation.

He said the reason he had refused to ink the controversial Bilateral Security Agreement (BSA), which would allow limited number of US troops to stay in Afghanistan after the 2014 withdrawal of NATO-led forces from the country, was lack of cooperation from the US and Pakistan in the Afghan peace process, Xinhua reported.

Afghans in a traditional Loya Jirga or grand assembly attended by some 2,500 tribal elders, social figures and politicians from across the country in November 2013 endorsed the BSA and called upon Karzai to ink it, but he refused to do so.

Karzai said he as president of Afghanistan had visited Pakistan 20 times to find a solution for the Afghan peace process but the efforts were in vain.

“I would have signed the BSA if America had cooperated in the peace process,” the outgoing president said.

He also urged his successor to be cautious with regard to national interests and in dealing with foreign countries.

Karzai also defended his achievements over the past 13 years, saying he began from zero 13 years ago as there was nothing, and today Afghanistan has security forces, a parliament and a strong administration.

Karzai, who has ruled Afghanistan since the collapse of the Taliban regime in late 2001, is scheduled to hand over power to his successor, Ashraf Ghani Ahmadzai, in a ceremony Sep 29.