China pushed for increased economic cooperation with India and to be included in the country’s burgeoning infrastructure and manufacturing story through investments as Chinese Foreign Minister Wang Yi Monday touched base with Indian Prime Minister Narendra Modi, and said the new Indian government has “brought a new wind of change”. 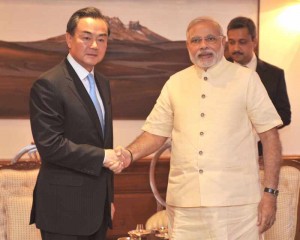 Wang said the new Indian government has “brought a new wind of change”, which is evident, and that the “international community has great interest and high expectations of the new government”.

“And China ardently hopes and is confident that under the leadership of Mr. Modi and based on existing achievements, Indians will achieve greater progress.”

Speaking to media persons, Wang said his most important message to Modi was “on your road to national rejuvenation China stands by your side”.

During his meeting with Modi, Wang conveyed a message from President Xi: “Under your leadership, India will achieve greater development and progress”.

The meeting lasted for 45 minutes and Sushma Swaraj was also present at the meeting, which was “constructive and cordial”, according to a release by the foreign ministry.

“China and India are partners in long term strategic cooperation. Let us work together to achieve peaceful cooperation and inclusive development for the benefit of our two people and in the interest of peace, stability and prosperity in Asia and the world,” Wang said, quoting President Xi.

Modi told Wang: “We are looking forward to working with the Chinese leadership to expand our partnership”.

Wang told newspersons that India and China were on the verge of inking an agreement on visa simplification.

“We have reached an agreement on visa simplification.. and hope it can be inked soon as possible for greater people to people contacts.”

He said China needs to invest more in India, in the field of infrastructure and general manufacturing, which would bring “big benefits to the people and achieve common development” for both countries.

On the festering boundary issue, the Chinese minister said it was an issue “from history”, but Beijing is “ready to properly handle” it “leading to a final settlement”.

He said both China and India have succeeded in maintaining peace and tranquillity on the border, which he described as “hard won achievement”.

“China is ready to adopt a positive attitude toward anything that might happen on the border and confident India will do the same.”

Wang said both China and India should have “far more pleasant and good stories to tell than unpleasant ones”.

To a question on stapled visas, Wang acknowledged the Chinese position that “in the eastern sector (Arunachal Pradesh) relatively big area is in dispute. It is an objective fact. But the people living there need to interact with each other, and as a special arrangement we have resorted to stapled visas to address the need of the local people to travel.. This is a gesture of goodwill and flexibility”.

He added that the practice has been “going on for relatively long period of time and if acceptable to the Indian side it could be continued in future because it does not compromise or undermine our respective positions on the boundary question.”

However, he added that both sides can hold further discussions on the subject and suggested that they could come up with a “more convenient visa provision” for the people of Arunachal Pradesh.