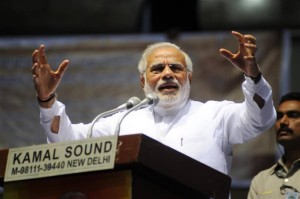 With one phase of polling remaing, the current odds on Modi are 32 paise and Rs.10 for Rahul.

Unexpectedly, Priyanka Gandhi who recently entered the campaign fray without contesting, and virtually pushed Modi into a political corner, is ranked a hot favourite at 50 paise – far above her brother Rahul.

However, the quote for the number of seats the Bharatiya Janata Party (BJP) and allies bag together is estimated around 230 seats – far below the majority of 272 seats.

The odds of the National Democratic Alliance (BJP & allies) getting around 230 seats in the next Lok Sabha are Rs.1, an improvement since mid-April’s figure of around 180 seats as the 2014 general election recorded unprecedented voter turnout in all the eight phases till date.

On the other hand, the bookies predict that Congress’s progress may be arrested at around 140 seats, partly owing to the anti-incumbency factors and the aggressive campaign launched by Modi.

Surprisingly, the Left Front and other parties together may grab the rest, pointing to the resurgence of a strong Third Front emerging out of the 2014 Lok Sabha polls and the possibility of new permutations and combinations.

An estimated betting worth over Rs.11,000 crore has taken place in Mumbai, New Delhi, and Ahmedabad cities along with Pakistan and Dubai where the Indian polls are being keenly watched by expats, said the sources.

Among other highlights, the NDA)is expected to perform exceedingly well in Uttar Pradesh, Rajasthan, Madhya Pradesh, Maharashtra and Gujarat.

At the same time, other non-United Progressive Alliance (UPA), non-NDA parties are also likely to improve their performance based on regional sentiments and local preferences, overtaking the two main contenders.

Betting in India is illegal and the security agencies are closely monitoring the developments in betting circles.