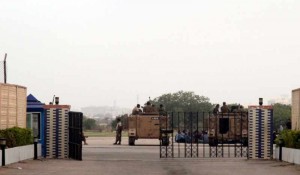 The rescue operation followed by the attack, continued for nearly 28 hours.

According to officials, the rescue workers broke down three walls of the cold-storage facility and retrieved the bodies which were badly burnt and were beyond recognition.

The victims had taken refuge in the cold-storage facility to escape the attack where they were later trapped.

They were employees of a private cargo company, the official said.

Speaking at a press conference held at the airport Monday, Interior Minister Chaudhry Nisar Ali Khan said that at least 19 security personnel including 11 Airport Security Force personnel were also killed in the attack.

He added that the main target of the militants was to destroy aircraft in which they failed.