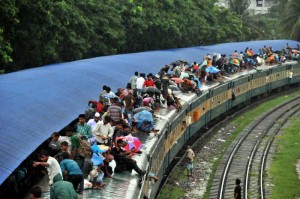 The Supreme Court  issued notice to the central and state governments on a petition seeking declaration that all the refugees that came to India from Bangladesh be described as displaced persons and not illegal migrants.

A bench of Chief Justice H.L.Dattu and Justice A.K.Sikri issued notice on the plea by the Joint Action Committee for Bengali Refugees which has also sought that the cut-off date of March 25, 1971, for the identification of illegal Bangladesh migrants and deporting them too be lifted.

However, the court did not grant the plea by the counsel Dhirendra Kumar that the deportation proceedings of the Bangladesh migrants – identified as illegal – be put on hold.

Seeking the citizenship rights for these migrants from Bangladesh, the petitioner urged the court to direct that they be given national identity cards, Aadhaar cards, and voter identity cards by taking their names on electoral rolls.A

The NGO has contended that under the Government of India Act, 1935, displaced persons/refugees including refugees from East Pakistan, now Bangladesh should not be dealt with under the Foreigners Act, 1946 and they should not be treated as illegal migrants.

The petitioner said that migrants from Bangladesh are the victim of Partition and their families are suffering for generations on account of their religious identity, and livelihood and were leading a miserable life, which violated their fundamental rights under articles 14 and 21 of the constitution.