A leading Pakistani daily Thursday wondered about the army’s role in the current political impasse, saying that perhaps it even steered events from behind and was like a “big brother chiding the children of democracy to behave – or else”. 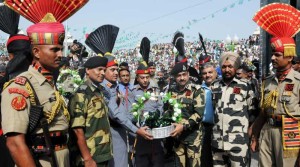 “In the evolution of virtually every political crisis, there comes a point where the military leadership issues a carefully worded statement that is designed to come across as well-meaning and generous, but is in fact ill-advised and unnecessary,” said an editorial in the Dawn.

On Tuesday, after silently watching the latest political crisis from the sidelines, “the army leadership decided to wade deep into the crisis and offer some political advice to the political leadership”.

Inter-Services Public Relations (ISPR), the communications wing of the Pakistani military, issued a statement on the political leadership needing to demonstrate “patience, wisdom and sagacity”.

But, it had “nary a word to say on constitutionalism, democracy and the rule of law. Instead, there was the usual martial language about sacred symbols of the state and the need to protect the national interest.”

“Place Tuesday’s ISPR statement in the proper historical context and it amounts to little more than big brother chiding the children of democracy to behave – or else. The ‘or else’ is always left unsaid, but the country hardly needs reminding about what it could be,” the editorial added.

The daily said that without a doubt, “the army leadership has grabbed with both hands the opportunity that the political leadership has created for it – perhaps even steered events from behind the scenes to the present impasse”.

The editorial went on to say that Pakistan Tehreek-e-Insaaf (PTI) leader Imran Khan and Pakistan Awami Tehreek (PAT) chief Tahirul Qadri had kept each other at arm’s length since setting out from Lahore Aug 14.

“Yet, on Tuesday, the two leaders coordinated their entry into Islamabad’s so-called red zone to perfection… Amidst the sudden bonhomie between the PTI leader and Mr Qadri came the ISPR statement that piled on the pressure on the PML-N government.”

The daily noted: “If such a chain of events in the realm of civil-military relations is still possible in this day and age, some of the responsibility must surely rest on the shoulders of Prime Minister Nawaz Sharif for time and again mishandling the situation and underestimating his political foes.”

The government’s mantra of being open to talks within the Constitution with any of its political opponents is “almost meaningless at this late stage because the stakes have been raised so high”.

“What was needed was some purposefulness and clarity by the government – instead, it meekly allowed protesters to camp outside parliament,” it added.