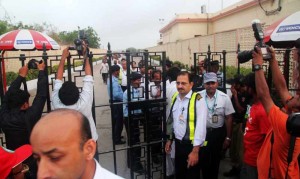 Pakistan’s Civil Aviation Authority (CAA), in its statement, said the airport was reopened to passengers after the security forces declared it clear.

Earlier in the afternoon, the airport was handed back to the CAA after the army completed its sweeping search operation at the airport premises and its surrounding areas.

A spokesperson for the paramilitary Rangers force said the airport was handed back to CAA after it had been thoroughly checked by security forces and it was made sure that there was no trace of explosives.

During the closure of the airport since Sunday midnight, about 20 flights including seven international flights were affected that were diverted to other airports or cancelled.

Pakistan’s premier directed aviation and airport authorities to facilitate passengers by providing them all possible facilities, and to reopen the airport for routine operations without unnecessary delay.

The Pakistan International Airline (PIA) has announced its first schedule for two domestic flights, first from Karachi to Islamabad and second from Islamabad to Karachi in the Monday evening.

The incident started at about 11.20 p.m. (local time) Sunday night when at least 10 heavily armed militants entered the airport terminal, used for cargo and special VIP operations, after lobbing hand grenades and opening fire at the security personnel.

According to the officials, the militants reached the airport premises in a vehicle before splitting into two groups.

The assailants, wearing the attire of Airport Security Force (ASF), attacked the airport from two sides with rockets and heavy gun firing.

The drop-scene of the attack happened early Monday morning when all 10 attackers were killed after a joint operation by Pakistan Army, Rangers, ASF and police.

Seemi Jamali, medical superintendent Jinnah Hospital Karachi, said overall 19 bodies and 25 injured were rushed to the hospital where some of the wounded were being treated in intensive care unit.

A report about the attack has been submitted to the Pakistan prime minister, which said the terrorists tried to take control of the airport and wanted to destroy all planes present at the airport, but security forces retaliated and foiled their plan, Xinhua reported.

On Monday morning, Pakistan Taliban claimed responsibility for the attack saying that it was launched in retaliation of unannounced military operations at their hideouts in the north-western tribal areas of the country.

Taliban spokesperson Shahidullah Shaid termed the attack as a revenge for the killing of former Taliban chief Hakimulla Mehsud in a US drone strike in November last year and vowed to conduct more such attacks in future.