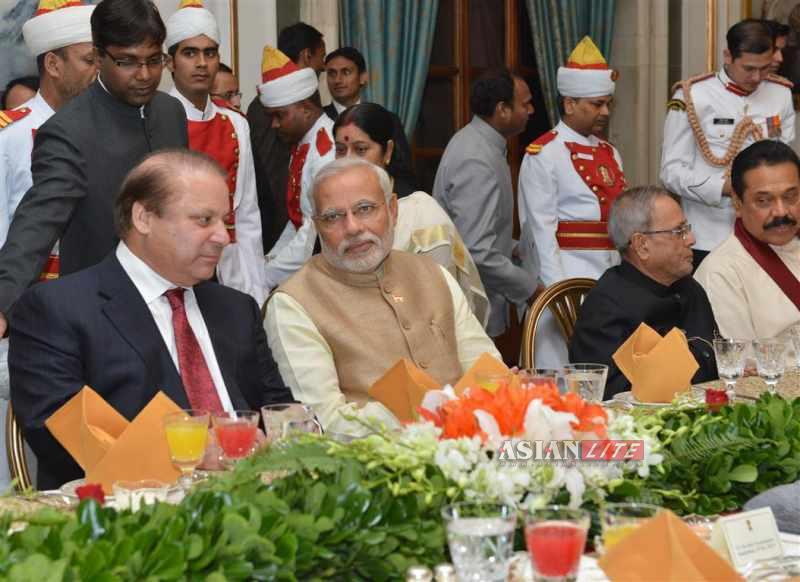 Prospects of peaceful times and improved bilateral relations were the main theme in media reports following Modi’s meetings Tuesday with leaders of the region as he hit the ground running on his first day as prime minister.

Leaders from the Saarc nations were here to attend the swearing-in ceremony of Modi as India’s 14th prime minister Monday. Modi met all leaders bilaterally the next day.

The meeting between Modi and Pakistan Prime Minister Nawaz Sharif hints “at the prospects for peace and the likelihood of trouble in the months ahead”, said a Pakistani daily in its editorial Wednesday.

The editorial, “A new page?”, appeared in the News International a day after Sharif and Modi met in New Delhi. Sharif, along with other SAARC leaders, attended the swearing-in ceremony of Modi Monday.

The daily noted: “The meeting between Nawaz and Modi hinted both at the prospects for peace and the likelihood of trouble in the months ahead. Nawaz focused, as he always has, on engagement but Modi spoke mostly of terrorism, particularly the Mumbai attacks of 2008.”

The daily said that Sharif’s India trip for the inauguration of Modi was “in itself such a seismic event – the first time ever for a Pakistani leader – that it would have been unrealistic to expect any substantive breakthroughs”.

“Instead, this was a battle for public relations and setting the ground for an improvement in relations further down the line. In this Nawaz excelled, particularly with the poignant touch of calling on ailing former Indian prime minister Atal Bihari Vajpayee at his residence,” it said.

Vajpayee’s visit to Lahore to meet Nawaz is “still fondly remembered as a rare high point in Pakistan-India relations and served as a reminder to Modi that there is a history of the BJP (Bharatiya Janata Party) engaging Pakistan positively”.

The media in Bangladesh cited the country’s Prime Minister Sheikh Hasina as expressing the hope that good relations will be maintained with India with Modi at the helm.

“I believe we’ll be able to keep up a good relationship. Modi has his own ideas, now he has become Indian prime minister and I hope as prime minister of India he would play his due role so that all neighbouring countries have good relations,” the Daily Star quoted Hasina as saying Wednesday.

During the meeting with Shirin, Modi listed Bangladesh’s success in areas like micro-finance and poverty alleviation and said South Asian nations should adopt each other’s best practices.

During the two leaders’ bilateral meeting in New Delhi Tuesday, Rajapaksa stated that India’s leadership was crucial for the success of the South Asian Association for Regional Cooperation’s (Saarc) operations and the countries must focus on common issues that can benefit the region on a global platform, the Daily News reported.

On his part, Nepal’s Prime Minister assured Modi that the Himalayan nation would have a new constitution within a year.

During their meeting, Modi expressed concern over Nepal’s constitution drafting process, and in response, Koirala assured him that the new constitution would be ready within a year, The Himalayan Times reported.

Koirala extended an invitation to Modi for the upcoming Saarc summit in November and requested him to visit Kathmandu even before the summit.

According to the Afghanistan Times, during President Hamid Karzai’s meeting with Modi, the latter vowed to lend India’s all-round support to Afghanistan under the bilateral partnership agreement between the two countries.

During the meeting, they discussed last week’s attack on the Indian consulate in the Afghan city of Herat, and Modi praised the timely response of Afghan security forces in repelling the terror strike.

In the Maldives, President Abdulla Yameen said his country accepted India’s leadership role in the international arena as this would benefit the Saarc countries.

During his meeting with Modi in New Delhi Tuesday, both leaders agreed to further strengthen bilateral relations, Minivan News reported.

The importance of strengthening Saarc should be prioritised over bilateral issues among its members, Modi told Yameen.

According to the media in Bhutan, Bhutanese Prime Minister Tshering Tobgay and Modi have agreed to commence four new joint-venture hydroelectric projects with a capacity to generate 2,120 MW.

During the meeting, Modi assured support to Bhutan as it is one of India’s close neighbours and agreed to coordinate and cooperate on issues relating to their national interests.

“He is a prime minister who delivers and from the interaction, we could sense he has concerns for Bhutan and the region,” Bhutan Foreign Minister Rinzin Dorji said after the meeting.