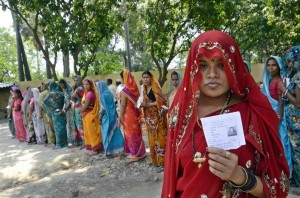 India’s most bitterly fought parliamentary elections end Monday when the last lot of 41 Lok Sabha constituencies vote in three major states, bringing the curtains down on a five-week-plus process widely expected to end a decade of Congress rule.

An estimated 66 million people will be eligible to vote in Bihar, Uttar Pradesh and West Bengal Monday to pick 41 MPs from among 606 candidates in a contest that has been nationally overshadowed by BJP’s prime ministerial candidate Narendra Modi.

Overall, 9,667 candidates fought for the Lok Sabha seats in a poll that showed a high voter turnout among the 814 million electorate, the world’s biggest.

And Modi, political analysts say, will remain in the centre of it all — through the last round Monday and when the millions of votes cast all over the country are counted Friday, May 16.

Congress leaders apart, no one seems to have any doubt that the Congress-led UPA is on its way out. Fingers, however, are crossed on whether a BJP-led coalition led by Modi will secure a clear majority in the 545-member Lok Sabha or will it be forced to hunt for numbers to form a government.

Election watcher G.V.L. Narasimha Rao, who is with the Bharatiya Janata Party, is emphatic that Modi, 63, is all set to become India’s next prime minister.

“There is a wave for Modi, and I think this will be the best victory for the BJP ever,” Rao told IANS. “The Congress will drop to its lowest tally. We will have a stable BJP government led by Modi on the 16th.”

Most opinion polls put the BJP far ahead of the Congress and others although there is some lingering doubt if the BJP and its allies will bag the magic number of 272 to cross the half-way mark in the Lok Sabha.

Political analysts Dipankar Gupta and Paranjoy Guha Thakurta feel in the event the BJP flounders on the victory lap, it could mean a BJP regime led by someone other than Modi.

“There can be a possible resurgence of the BJP’s old guard if Modi fails to take the BJP beyond 180-190 seats. In that case, BJP may still form the government but with a different leader,” Gupta told IANS.

But the BJP — and Rao — refuse to accept a BJP-minus-Modi-government theory.

“We are confident the BJP-led NDA (National Democratic Alliance) will get a clear majority,” party spokesman Prakash Javadekar told IANS. “We will actually get more than 272 seats.”

But the Congress thinks differently. “We are confident we will form the government,” spokesman Sanjay Jha told IANS.

Along with the Lok Sabha election, Sikkim, Odisha and Andhra Pradesh also voted for new assemblies.

Political parties and their leaders ended weeks of tiring campaign Saturday evening, setting the stage for the final round of election Monday in 71,254 polling stations in Bihar, Uttar Pradesh and West Bengal.

One of the 18 Uttar Pradesh Lok Sabha constituencies which will vote Monday is Varanasi, the second seat from where Modi is contesting besides Vadodara in Gujarat.

Pitted against him are some 40 candidates but the two most serious challenges are Aam Aadmi Party leader Arvind Kejriwal and Ajay Rai of the Congress.

The number of constituencies which will vote in West Bengal Monday will be 17 and six in Bihar.

Analyst Gupta, formerly with the Jawaharlal Nehru University here, felt this was because the Gandhi family that controls the Congress was for the first time threatened deeply in terms of its very ability to function in future.

“And this was done not by a party but a person who has to a large extent destroyed the organisation to which he himself belongs,” he said, alluding to the manner Modi has sidelined seniors in the BJP.