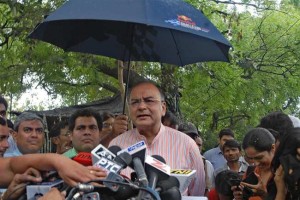 A day after several exit polls predicted a BJP-led government in India, with only the margins of victory differing, party leaders said Tuesday they were confident of an easy win, perhaps crossing the 300 mark, and would not need allies.

Party leaders and those close to the leadership told IANS that neither the Bharatiya Janata Party (BJP) nor its prime ministerial aspirant Narendra Modi were discussing government formation for now. But there was talk in the party about who would fill important ministerial posts or what would be the government’s policy priorities.

“Right now there is no talk on government formation. Our priority is on the 16th (Friday). We are focusing on the counting (of votes),” BJP leader Mukhtar Abbas Naqvi told IANS.

“Once the results come in, the party will decide what should be the next course of action towards government formation,” he added.

The polls – at least six of them – said the BJP and its allies would win 272 or more seats in the Lok Sabha so as to form a government.

“The exit polls largely reflect the reality on ground though we feel we will get more seats than what is being predicted,” said another BJP leader Prakash Javadekar.

Other leaders, speaking on background, said internal assessments showed the NDA would get 290 to 305 seats, and they would not need allies.

“We will not need any allies but anyone who wants to join us for national development is welcome,” a senior BJP leader said.

The party is looking for a major jump in Uttar Pradesh, expecting over 50 of the 80 seats. The BJP presently has 10 Lok Sabha seats in the state.

In Maharashtra, the party is expecting upto 35 seats for the NDA. The BJP presently has nine of the state’s 48 seats and its ally Shiv Sena 12.

Some party sources, however, confided that preparations for forming the government had started, including a succession plan for Gujarat.

Speculation over ministerial berths is on and party members say they expect Arun Jaitley to get the finance ministry while Sushma Swaraj may get external affairs.

While Rajnath Singh has said he will continue in his post, there is a feeling he should get a key ministry as well.

Political analyst G.V.L. Narasimha Rao, now with the BJP, feels the party will win 253 seats on its own and the NDA 303 seats.

Modi, who led an aggressive campaign for the BJP after being named the prime ministerial candidate last year, is now in Gujarat, whose government he still heads, Naqvi told IANS. Naqvi said he was not sure if Modi will be in Delhi during the vote count Friday.

The BJP gave a 13-day government and later a six-year government from 1998 to 2004, both led by the now ailing Atal Bihari Vajpayee.

Now, riding on what is widely seen as a “Modi wave”, the party appears set to return to power in the world’s largest democracy.

Both Naqvi and Rao said the BJP was aware of the many problems a new government will grapple with.

“We know what the challenges are,” Rao said. “There are a lot of expectations from the BJP, and there is also a lot of urgency in areas such as the slackening economy.

“Once we initiate the process for growth, the results will be visible in a few months,” Rao told IANS.

“As far as price rise is concerned, there are no magic solutions, but once the overall economy is taken care of, inflation is likely to be checked.”