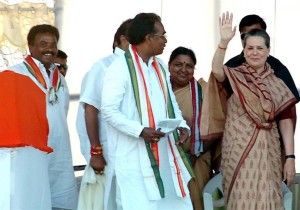 The Congress party in Telangana and the Telugu Desam Party (TDP) in Seemandhra are ahead in the municipal elections as the counting of votes was underway .

Out of three municipal corporations which went to polls in Telangana, the TRS has bagged Karimnagar while the Congress is ahead in Nizamabad and Ramagundem.

Overall, the Congress has so far won 394 seats and the TRS 245 seats in Telangana.

In Seemandhra, the TDP is ahead of its nearest rival the YSR Congress Party (YSRCP) while the Congress has almost been wiped out due to public anger over bifurcation of Andhra Pradesh.

The TDP has won control of 36 municipalities while YSRCP has won 11. Among the seven corporations which went to polls, the TDP has bagged Chittoor and is ahead in two other urban bodies.

The counting of votes polled in March 30 elections in 10 municipal corporations and 146 municipalities began at 8 a.m. Monday at 155 centres across the state.