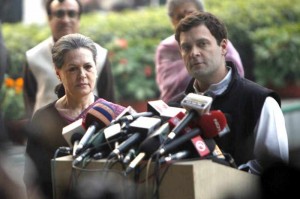 Party sources said Prime Minister Manmohan Singh also said it was not a solution to the problem.

“The resignation of Sonia and Rahul is no solution to problems faced by the party,” a source quoting the prime minister said.

The sources added that almost one-third of the time of the meeting was taken up by the members urging Sonia and Rahul Gandhi not to press their resignation.

A party leader said: “Many members said the party was not able to properly communicate with people. Rahul Gandhi is likely to be given more free hand in organisational affairs in the coming days.”

The CWC met here to take stock of the party’s worst performance in the 2014 Lok Sabha elections, in which it won just 44 seats.

After the results were announced May 16, Sonia and Rahul Gandhi owned up responsibility for the party’s performance.

Party leader Oscar Fernandes said: “There is no question of retreat. We will fight.”