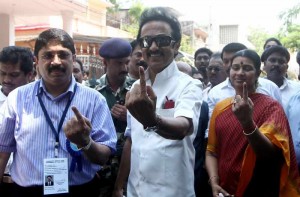 M.K. Stalin, the DMK treasurer and son of party president M. Karunanidhi, has offered to give up his party post following the party’s rout in the Lok Sabha polls, a party source said Sunday.

Speaking to IANS on the condition of anonymity, a DMK leader said: “He (Stalin) has offered to resign from the post accepting moral responsibility for the defeat.”

Stalin’s offer follows the DMK’s washout in the Lok Sabha election in Tamil Nadu. Of the state’s 39 seats, the ruling AIADMK bagged a whopping 37 and the BJP and PMK won one each.

But the DMK leader who spoke  said that since Stalin was a key figure in the party, his offer may not be accepted.

There was no word from the party on Stalin’s reported move.

The run-up to the Lok Sabha election saw a bitter fight in the party’s first family, leading to the dismissal of Stalin’s elder brother M.K. Alagiri, the DMK south zone organising secretary.

On Sunday, Alagiri termed Stalin’s decision a “drama” and a plan to capture the “top party post”.

Alagiri said “It all drama. His supporters will urge him to stay put and he will continue as before. It is part of a plan to bag the top leadership.”

“In the current set up, there is no future for the party,” Alagiri said.

He added: “The party president (Karunanidhi) has to take charge. Only then the party has a future.”

Asked if he would rejoin the DMK, Alagiri said: “If I am called and given due respect, I will join the party again.”

Alagiri, 63, had earlier accused the DMK of nominating only rich candidates in the Lok Sabha election and ignoring long-time activists. He blamed Stalin, 61, for this.

Stalin had also reportedly argued against an alliance with the Congress in the state. He also refused to give ticket to any Alagiri supporter.

On Jan 24, the DMK suspended Alagiri for opposing Stalin, who is tipped for the party’s top post. Both are 89-year-old Karunanidhi’s sons.

Founded in 1949, the DMK is one of India’s oldest parties.