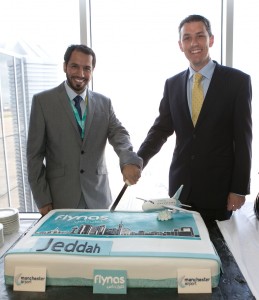 Manchester welcomes flynas, the leading low-cost carrier from Saudi Arabia, with a traditional at Water Salute for its inaugural flight from King Abdulaziz International Airport, Jeddah.

Manchester is flynas’ second destination in the UK.

Commenting on the successful launch of the carrier’s second destination in the UK, flynas CEO Raja Azmi said: “It’s incredibly satisfying to see our Global Flights Routes program take off so successfully. The start of our non-stop flight operations to Manchester solidifies our intentions to build a strong offering for our customers to key European destinations and offers travelers access to an important Northern European travel hub.”

Aviation Commercial Director at Manchester Airports Group (MAG), Stephen Turner said: “We are delighted to welcome flynas to Manchester for the first time and we’re keen to support their continuing growth from the UK. The Middle East is a key region of growth for us at Manchester and we know that passengers in the North West want to fly direct to Jeddah. This route will support better trade links between our two countries, as the North West already sees over £200m worth of trade with Saudi Arabia, but we know we can do more and this service with flynas will help to increase those levels.” 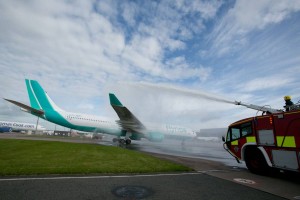 The flynas Global Flight Routes program was launched in April 2014 and covers a number of new non-stop routes across Europe, Asia and Africa, all flying out of the carrier’s international hub in Jeddah, Saudi Arabia. In addition to Manchester, the international network includes flights to London Gatwick, Paris, Kuala Lumpur, Jakarta, Karachi, Lahore, Islamabad, and Casablanca.

The long-haul flights are being operated using Airbus A330 aircraft, part of a major fleet investment for flynas. The aircraft are set up in a two-cabin configuration which includes a new 12-seat Business Class Cabin fitted out with a reclinable flat-bed. Passengers in both Economy and Business Class have access to smart in-flight entertainment, generous hold luggage and a host of other onboard services.

Flynas, with a young fleet of 27 aircraft, is operating nearly 950 weekly flights on 26 destinations within and outside of Saudi Arabia. Launched in 2007, flynas has successfully operated over 140,000 flights carrying more than 15 million passengers, a number that has steadily grown over the years.  flynas unveiled a new modern identity in 2013 and made significant investments in enhancing its aircraft fleet and introducing a dedicated Business Class Cabin.

In 2014, flynas has launched and pioneered the Low Cost Carrier Plus (LCC+) concept that allows the carrier to offer its passengers value-added, services-driven, yet affordable international air travel on both Business Class and Economy Class, as part of its Global Flight Routes program. This program will drive the future growth of flynas, as it expands its presence on three continents – Asia, Africa and Europe.

In 2013, flynas carried 3.3 million passengers; its highest ever since launch.