Abhimanyu Singh analyses the fall of the Communist Parties in India – From 60 to 12 MPs. Now the  supporters are targetting the  ‘jaded leadership’ 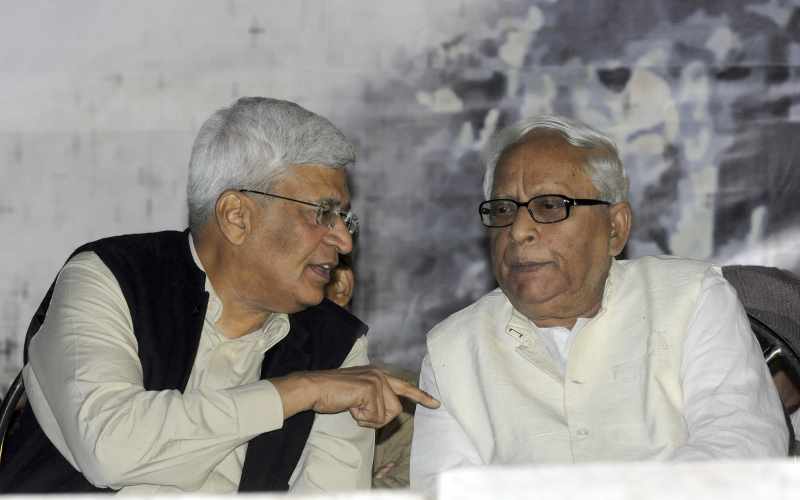 There is seething anger in the ranks of the Left over the drubbing it received in the Lok Sabha elections and senior leaders as well as sympathisers are clamouring for a new leadership. Amid a “Modi wave” that decimated several opposition parties, the Communists have been reduced to a rump of 12 in the 543-seat Lok Sabha, a far cry from the 60 MPs it had a decade ago.

Unable to digest the shocking result, Communist sympathisers underline the need for a thorough overhaul of the CPI-M and the CPI.
Jaded leadership, poor candidate selection and failure to “modernise its ideology” have led to the steadlily declining appeal of the Communist parties in the country, Left leaders and watchers said.

A senior Left leader told IANS that the CPI-M’s top brass, including Prakash Karat and Sitaram Yechury, should be held accountable.

“Accountability must be fixed. You cannot get away without accepting responsibility for a loss of this magnitude,” the leader told IANS, adding even CPI-M politburo member M.A. Baby lost in Kollam in Kerala.

The Communist Party of India-Marxist (CPI-M) now has just nine MPs, including just two (out of 42) from West Bengal, a state it proudly ruled for 34 years until the Left Front was voted out in 2011.

Tripura’s both Lok Sabha seats went to the ruling CPI-M, which also won five of the 20 seats in Kerala. Two Left-backed independents also made it in Kerala.

One Left source insisted that it was a mistake to have continued with the same leadership in West Bengal after 2011.

This is the reason the CPI-M is “unable to resist the Trinamool” in the state, said the source.

He added that the CPI-M had failed to learn from its mistakes and there had been no “true introspection” about the adverse results of recent past, culminating in the latest debacle.

“It is important how people perceive you. In Assam, (Chief Minister) Tarun Gogoi took responsibility for the loss. That sort of thing doesn’t happen in the Left,” the source told IANS.

A senior party leader blamed an alleged clique around the senior leaders for the CPI-M’s near washout.

“Why was Subhasini Ali allowed to contest from (Barrackpore in) West Bengal where she had no mass base?” he asked. Ali is said to be close to CPI-M general secretary Prakash Karat and his wife Brinda Karat.

Despite the widespread anger against the Congress in the country which crushed that party, the Left failed to make substantial gains in Congress-ruled Kerala, winning only one seat more than its tally in 2009.

Some in the Left believe that if better candidates had been put up in Kollam, Alappuzha, Kozhikode and Vadakara in Kerala, the Congress may have been defeated.

The Forward Bloc and the Revolutionary Socialist Party (RSP), which are with the Left in West Bengal, couldn’t win a single seat. But a rival RSP faction which deserted the Left in Kerala won one seat.

Adding to the humiliation is the way the Bharatiya Janata Party (BJP) — the Left’s most bitter ideological foe — swept the Lok Sabha polls, scoring major gains even in Left strongholds in West Bengal and Kerala.

“The reason I quit was because the CPI is not renovating itself,” Chenoy told IANS. “It is not democratically organised. That has put it in an ideological bind.”

He also regretted the Left’s inability to forge “broader alliances” with the Aam Aadmi Party (AAP), which, although born only in 2012, now has more seats in the Lok Sabha than the CPI.

Chenoy added: “It is still stuck in the 50’s and 60’s and functions in the Stalinist way.”