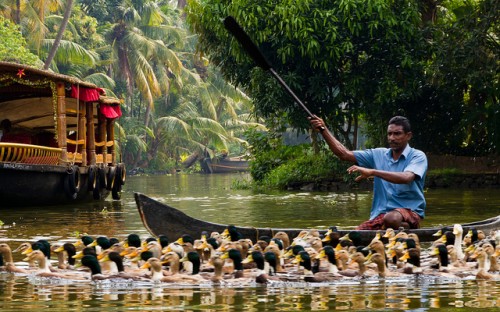 Left opposition legislator Thomas Chandy will organise a ‘Duck food festival’ in Kerala’s Alappuzha district to instil confidence in tourists to have poultry products after the bird flu outbreak is fully under control and has been contained.

The state government had directed people not to eat poultry product after the avian flu outbreak was confirmed in 13 local bodies of three districts, including Alappuzha.

People are still avoiding poultry products in Alappuzha, his home district, Chandy said while eating an omelette in the Kerala Assembly canteen.

“All credit must be given to the state government for effectively tackling the avian flu outbreak. Situation would have gone haywire for the houseboat industry in my district, had this outbreak not contained in one week,” said Chandy.

“I gave this idea of ‘duck food festival’ to Home Minister Ramesh Chennithala (his constituency Harippad lies in Alappuzha) and he instantly agreed to join the festival and eat duck meat. The festival is likely to be held in Alappuzha and I will talk to other legislators and health officials about the festival,” said Chandy.

The Alappuzha district was the worst affected and over 1.50 lakh birds, including majority of ducks, were culled and disposed off after the flu outbreak.

The tourism industry was concerned since the outbreak last week as the peak tourist season had just begun. Many tourists visit Kerala during the months of December and January.