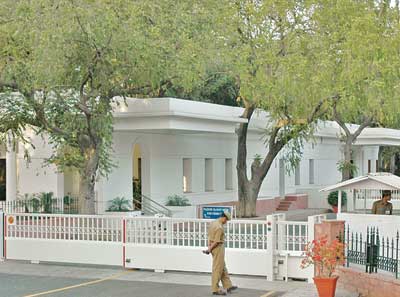 7 Race Course Road, the official residence of the Prime Minister of India, is getting a fresh coat of paint, while the already manicured lawns are being given a fresh roll and the expansive complex is getting a bright new look with lots of flowers to welcome its new occupant –Narendra Modi.

Informed sources told  that Modi, who will be India’s 14th prime minister, may shift to the new address soon after taking oath or the following day.

If he moves in May 26, then he would be staying in bungalow No.3, one of the five bungalows which is used as a guest house in the sprawling 12-acre premises.

“The guest house is ready to host Modi if he decides to shift immediately (after the oath ceremony),” one source said.

The oath-taking ceremony will be held at the Rashtrapati Bhavan, around three km from Race Course Road.

“We will change the decor as per his (Modi) taste. So far, renovations are being carried out on the exterior buildings. A decision on the decor will be taken after he moves in and give his suggestions,” the source said, declining to be identified.

Official sources said the renovation work was started soon after the Lok Sabha results were declared May 16 which gave a clear mandate to the Bharatiya Janata Party thus bringing an end to the decade long Congress-led regime.

According to officials of the Central Public Works Department (CPWD), which looks after the complex, all the bungalows and boundary walls have been given a fresh coat of white paint. The gardens are being manicured and the flower pots too are being painted. Some renovation work is also being carried out at the guest house.

Situated in the heart of Lutyens’ Delhi and surrounded by prominent buildings like the Indira Gandhi Memorial Trust, embassies and high commissions as well as hotels like Ashok and Samrat, the property has five sprawling bungalows.

While one of them is occupied by the Special Protection Group (SPG), an elite security force that provides protection to the prime minister, another is used as a guest house, primarily for hosting delegates, and the third bungalow is used by the prime minister for official meetings.

Of the five bungalows, 7, Race Course Road was being used by outgoing prime minister Manmohan Singh and his wife Gursharan Kaur as their residence for 10 years.

The entire complex, which is very green and neat, is guarded by SPG commandos, while police is responsible for securing the outside periphery.