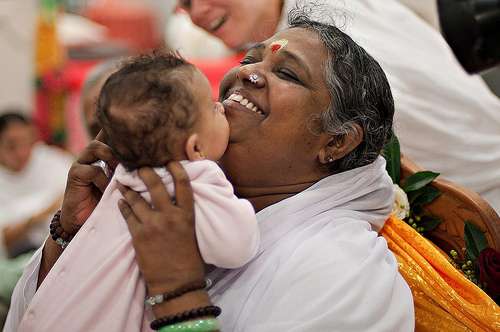 Mata Amritanandamayi’s followers have arrived at her ashram here from all over the world to take part in her 61st birthday celebrations that begin Friday.

Home Minister Rajnath Singh and other leaders will arrive Saturday to attend the two-day event ‘Amritavarsam61’ Sep 26 to 27 and greet Amma.

On Sep 27, important announcements and inaugurations of new charitable projects will be made by the Mata Amritanandamayi Math (MAM) and its allied institutions.

The celebrations will start with a Sri Guru Padapuja, the ceremonial washing of guru’s feet, followed by Amma’s annual birthday address beside hugging each and every one who will be there.

An MAM spokesperson said Amma gave up her entire life in the service of mankind.

“Amma’s mission takes into consideration the entire world community, while at the same time giving importance to a individual,” he said.

Amma inspired research groups at Amrita Vishwa Vidyapeetham – the university founded and managed by the MAM – to engage in projects which benefit the society.