The Bharatiya Janata Party Tuesday took jibes at the opposition Congress in the Lok Sabha, saying it has been reduced to the status of a regional party. 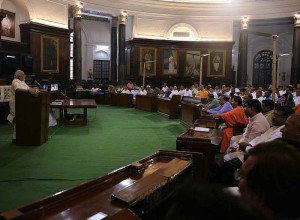 “Let us analyze the mandate first. The Congress has been ruling the country for 55 years. They have just 44 members today. The BJP fielded 428 candidates and they got 282 members,” BJP member Rajiv Pratap Rudy said, opening the debate in the lower house on the motion of thanks on the president’s address.

He said while the BJP has increased its vote share in states like West Bengal, apart from states where it was already doing well, some parties have all but been wiped off.

“I always used to wonder what is happening in Uttar Pradesh. Parties are fighting each other in the state and in Delhi they were supporting the UPA government together. The people of the country were observing this and these parties were taught a lesson.”

“While one party has been wiped off, one party could only get its family members elected,” he said.

Taking a jibe at the Congress, he said: “We used to respect the regional parties but never expected that a national party would be reduced to a regional party.”

Rudy said there was a need to focus on creation of jobs. “You are all elected representatives, you will realize that people just want jobs. How would we do it? Industrialists have invested in United States, but they have left our country.”