Some 240,000 people travelled Sunday on the inaugural service of the Mumbai Metro, run by Reliance Infrastructure (RInfra), which said it is overwhelmed by the public response. 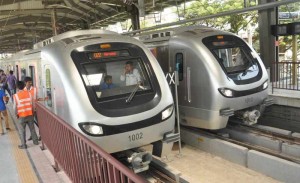 “It was a momentous occasion for us when the commercial operation of Mumbai Metro started. Despite being Sunday and opened for public only from 12 noon, 240,000 people travelled. This would redefine the way Mumbaikars travel,” said RInfra CEO Lalit Jalan.

The city’s first rail corridor providing a critical east-west link is expected to serve around 700,000 commuters daily in its first year of operations.

In order to popularize the system, Mumbai Metro One Pvt. Ltd. (MMOPL) has announced a month-long promotional fare of Rs.10 between any of the 12 stations en route on the 11.40 km line.

The Mumbai Metro reduces the travelling time from around 90-120 minutes to just 21 minutes between Versova-Ghatkopar and will run daily 5.30 a.m.-midnight with peak hour frequencies of four minutes and non-peak hour services every eight minutes.

“The beginning of the commercial operation of Mumbai Metro is a historical moment for the city of Mumbai. It will change the life of Mumbaikars and the way they commute everyday,” remarked Mumbai Metro One Pvt.Ltd. CEO Abhay Mishra.

Each coach of the colourful four-coach rakes has a capacity of around 375 commuters or around 1,500 commuters per service, zooming above the city between the two points – Versova-Ghatkopar – with a total of 12 elevated stations en route.