It required a new prime minister to shake up India’s notoriously slothful ‘babudom’ (colloquial for bureaucracy) and clean up its shabby offices and workplaces. 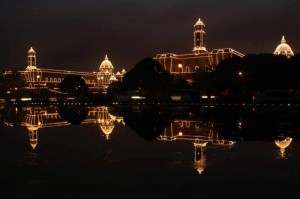 The broom is out. The dust and cobwebs are being cleaned out and old files and broken furniture being disposed of. At most government buildings in the capital, every corner – many littered with used teacups and betel-leaf stains – are being thoroughly cleaned out in keeping with Prime Minister Narendra Modi’s directive to maintain strict cleanliness and hygiene.

This even got reflected in the President’s address to parliament as an expression of government policy.

Heaps of old files, dusty and broken furniture – which had been left lying untended to for years and even decades – are being thrown away. This was the scene at Shastri Bhavan, that houses some of the most important ministries and offices of the Government of India.

Top officials of each ministry are dealing with the cleanliness drive, something that they failed to do in routine course all these years.

“We are disposing off all the old and broken furniture, all the old files,” a senior official said, declining to be named.

“We are inspecting the rooms, the corridors, and even the toilets to ensure everything is clean,” the official added proudly.

In another difference, all officials report on the dot at 9 a.m., a far cry from the unusal unpunctuality of government babus (clerks).

“Earlier, officials would come as they wanted.. 11 a.m., 11.30 a.m., nobody was there to bother. Now the reporting time is 9 a.m. and the hours are till 6 p.m. officially, but most senior officials stay till 8 p.m.” another official added.

Earlier, in Shastri Bhavan among the departments that were the cleanest, were the offices of the Corporate Affairs Ministry, the External Affairs Ministry and the Information and Broadcasting ministry. The others mostly looked unkempt.

Cracked and uneven floor tiles lined the dark and dingy corridors outside the offices of the top secretaries, the bathrooms stank, betel leaf and gutka stains marked the outside of the men’s bathrooms, and there were cobwebs in the corners of every common lobby on each floor, which was treated like no one’s department, and hence, no one’s responsibility.

Now that is changing, and changing at top speed.

“The new government has emphasised on speed and cleanliness and quick disposal of files.. So everything is moving fast. Earlier, nothing moved for months. No one seemed to work, or want to work. Now ministers take decisions on files in a jiffy,” said another official.

In a welcome change,  the cleaners sweeping the area behind where the guards sit on the ground floor of Shastri Bhavan – that was always dusty and dirty but escaped notice of the top bureaucracy.

A senior official from the Prime Minister’s Office is expected to and do an inspection of the cleanliness drive undertaken by the new government. The secretaries of every ministry have been instructed to keep everything neat and clean for the inspection.

“Our department was cleaned two days ago, and heaps of files and old furniture was thrown away. Each department is doing it by turns. It is good to have everything so clean,” said a woman official at Shastri Bhavan, declining to be named.

In a surprise, Neelam Kapur, Principal Director General (Media and Communication) of Press Information Bureau (PIB), came for an inspection to the new National Media Centre to check out on cleanliness and amenities Tuesday afternoon. A staffer who was pulling out some old notice from the wall got a gentle chiding from the top official.