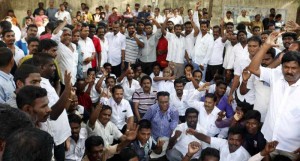 Several journalists were waiting outside Stalin’s residence here to gather news about his purported resignation as the party’s treasurer.

Expressing regret over the attack on the media persons, DMK organising secretary T.K.S. Elangovan said the party cadres “could have misunderstood the comments of media persons” and attacked them.

He also said miscreants present at the spot could have tried to create mischief.

Chennai Press Club joint secretary Bharathi Thamizhan condemned the attack on the journalists gathered outside Stalin’s residence “in pursuit of their professional duty”.

Thamizhan told IANS that a representation has been given to Chennai Police Commissioner J.K. Tripathy to take action against the attackers.

In a statement, the Madras Reporters Guild demanded the immediate arrest of the DMK cadres.

“Police should ensure that press people are allowed to discharge their duties in a free and frank manner,” guild president R. Rangaraj said.