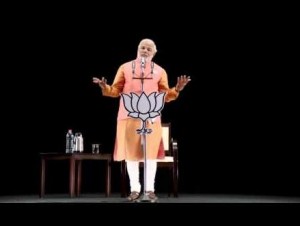 An era of responsibility has begun, said PM-designate Narendra Modi who became emotional Tuesday while delivering a speech after being elected leader of the BJP parliamentary party in Parliament House.

Addressing the party’s new MPs and other leaders in the Central Hall of parliament, which he visited for the first time and went down on his knees to touch his forehead to the steps leading to it in reverence to the ‘temple of democracy’, Modi said the majority given to the BJP in the Lok Sabha was “a vote for hope and faith”.

“A government should be one that works for the poor and this is why the new government is committed to the poor of the country and dedicated to the youth of the country as well as our mothers and daughters,” said Modi, adding: “The celebrations, excitement will go on but the era of responsibility has begun.”

The BJP-led NDA will laterTuesday meet President Pranab Mukherjee and stake claim to form the government.

The Modi-led BJP won a staggering 282 seats in the 545-member Lok Sabha, becoming the first non-Congress party since independence to get a majority on its own. The Congress fell to an embarrassing tally of 44 seats, its lowest ever.

Calling himself a disciplined soldier and vowing to work for the “poorest of the poor”, Modi said he would present his government’s report card in 2019.

Modi underlined that he should not be seen above the Bharatiya Janata Party (BJP) and credited his party’s stunning electoral victory to the BJP’s organizational strength. The Gujarat chief minister became emotional when he responded to veteran colleague L.K. Advani’s remarks that he had done a favour by leading the BJP in the election.

“Please don’t use the word ‘kripa’ (favour),” Modi said. “A son doesn’t do a favour to his mother. A son works with dedication. I treat the BJP as my mother just as India is my mother.”

“The party has done me a favour by giving me an opportunity to serve.”

Modi said it would be for the first time that the government would be formed under the leadership of a person who was born in independent India.

“We may not have been able to fight for the country’s independence but will dedicate our lives to develop this nation and work for the betterment of the people.”

BJP president Rajnath Singh described the moment as historic, and said this heralded an era in Indian politics that was dominated by the BJP, with all other parties pushed to a distant second as “others”.

“This is an unprecedented, historic moment. Although Janata Party secured a majority in 1977 and ousted the Congress, it was a conglomeration of various parties. The BJP is the first party which has achieved this feat on its own,” Singh said and added they have made inroads in states such as Kerala and West Bengal where it had been a non-entity in the past.

Singh said he was “happy and thrilled”, and described the day as the fruition of party ideologue Deendayal Upadhyaya’s dream of a “strong, self-dependent, and free” India.