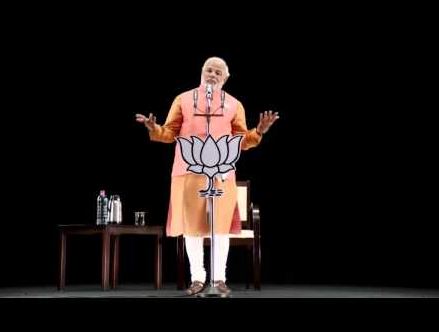 After 10 years of silence at the top Mr Modi’s speeches in Vadodra and Ahmedabad were a rich repast of rhetoric, slick oratory, some common and earthy similes and a fair amount of theatrics. He could have been a professional actor going through the motions or so naturally honest and up front and personal that he left his audience spellbound.

The atmosphere was magical. He did it all. The self-deprecation, the light humour, the grand passion, the zest for tomorrow, the seething rage of the insults heaped upon him, some sleight of tongue in smiting the Congress, a fair amount of public oriented demagoguery that echoed what it must have been like when Mark Anthony spoke at Caesar’s funeral and used words to ignite the imagination. When he talked of India as the mother of a billion people even a tear moistened my eye. When he spoke in Gujarati the crowds went wild. He played with them.

The cheering, the hosannahs, the chanting of his name could not have been more dramatic if they had been choreographed. The public truly loved him as he played with them, using his authentic ‘man of the people’ card to great advantage. He sued his body language to grand effect. Arms up, arms down, the fist thumping, at that moment he could have led an army into battle.
There was little of substance but a lot of ‘good feeling’ and the country at large bought into it.

And why not? Good feelings don’t come around too often. The sense of anticipation is razor sharp and the post victory speeches have added an extra edge.
Don’t be a cynic, said a fellow journalist when I commented that I felt there was a bit too much of ‘performance’ in the two first day speeches. And she is right. We always want to probe the fabric and test its texture. Give him a break. He hit the right spots, made the right sounds, showed spunk and humility, manned up and even shared his outrage at the attacks on him.
So indulge in the rich repast. But too much of it will give us indigestion. See, there I go again, looking for fault where no fault might exist.
What was your take on the speech? Better than the silence of the lamb or a wee bit too much drama.
PS: Among the many things that annoy one about Mr Arnob Goswami I think what ‘won’ no prizes yesterday was his refusing to allow the eloquent Mr Scindia to speak and that really teed me off. Can someone please shut him up so that the erudite can communicate with us rather than speak in tattered sentences because of this man’s incessant interference.