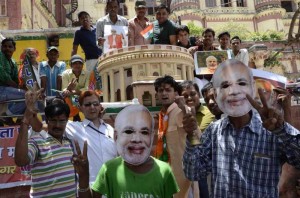 The number of parliamentarians with criminal cases has risen in the 16th Lok Sabha, with every third MP-elect facing criminal charges, an analysis of their election affidavits has shown.

An analysis of 541 of the 543 winning candidates by National Election Watch (NEW) and Association for Democratic Reforms (ADR) showed that 186 or 34 percent of the newly-elected members have disclosed criminal cases against themselves in their affidavits.

In 2009, 30 percent of the Lok Sabha members had criminal cases registered against them. This has now gone up by four percent.

According to a press release, a candidate with criminal cases had 13 percent chance of winning in the 2014 Lok Sabha election whereas it was five percent for an aspirant with a clean record.

The BJP won 282 seats in the Lok Sabha election, getting a majority on its own. The Congress won 44 seats.

The release said that of the 186 new members with declared criminal cases, 112 (21 percent) declared “serious criminal cases”, including those related to murder, attempt to murder, causing communal disharmony, kidnapping, crimes against women etc.

Party-wise, the largest 98 or 35 percent of the 281 winners from the BJP have in their affidavits declared criminal cases against themselves.

The analysis also showed a rise in the number of crorepatis (millionaires) in the Lok Sabha over the 2009 election.

The BJP has the highest number of crorepatis, the release said.

The release also said one of the newly elected members had declared himself to be illiterate.

The release said 61 (11 percent) of the newly elected members are women.