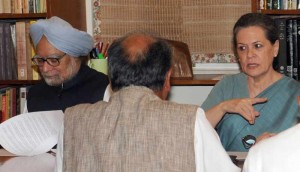 The Congress Working Committee (CWC) will meet in Delhi on Monday to take stock of the party’s worst performance in a Lok Sabha election.

Sources said party leaders will seek to identify the shortcomings and mark out a path of revival.

Though there has been speculation that party president Sonia Gandhi and vice president Rahul Gandhi may offer to resign at the meeting, some senior leaders denied the possibility.

Party sources said senior leaders are expected to speak frankly about shortcomings in the party’s strategy and election campaign.

They are also likely to convey their views on the performance of the United Progressive Alliance government.

Though there is talk in party circles on the need of fixing accountability for the failure in the Lok Sabha election, there is no clarity on how it will be done.

Sonia Gandhi and Rahul Gandhi have owned up responsibility for the party’s performance and there are suggestions for firm steps towards organisational revamp and ideological consolidation.

Congress sources said there was a possibility of the role of some leaders considered close to Rahul Gandhi coming under scrutiny.

The Congress could win only 44 seats against 282 won by the Bharatiya Janata Party in the general election.