Prime Minister Narendra Modi Saturday reached Goa and went aboard INS Vikramaditya, the largest and most powerful aircraft carrier inducted into the Indian Navy, marking his first visit to a military facility after assuming office last month. He also hopped into the cockpit of a MiG-29 K fighter jet. 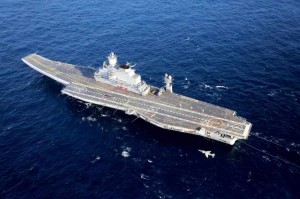 The prime minister took the salute and also met and interacted with the crew on board INS Vikramaditya.

Modi was accompanied by navy chief Admiral R.K. Dhowan, and was accorded a ceremonial guard of honour.

The 44,500-tonne INS Vikramaditya, procured from Russia, is one of the newest acquisitions of the Indian Navy and the most powerful symbol of its military reach. It was commissioned by then defence minister A.K. Antony last November at Russia’s Sevmash shipyard.

Dressed in his trademark kurta churidar and a blue waist coat, a smiling Modi waved his naval cap from the cockpit of the MiG-29 K during his several minute long stint in the pilot’s seat of one of India’s most advanced fighter jets.

The carrier can carry 30 aircraft while at sea.

His visit to Goa, where he will take part in a series of events, is his first domestic visit since he became the prime minister last month.

INS Vikramaditya has an overall length of 284 metres and a beam of 60 metres, stretching as much as three football fields put together. Standing about 20 storeys tall from keel to the highest point, the vessel has 22 decks.

With over 1,600 personnel on board, Vikramaditya is literally a floating city. Linked to the personnel on board is mammoth logistics requirement – nearly 100,000 eggs, 20,000 litres of milk and 16 tonnes of rice, to name just a few, per month.

During his visit to Goa, Modi is expected to announce some development projects for the state that has played a crucial role in his political career.