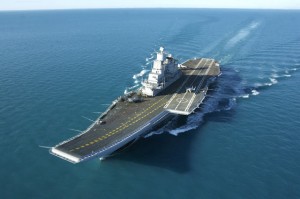 A group of newly elected BJP and Shiv Sena MPs from Maharashtra has urged the central government to turn INS Vikrant, the country’s first aircraft carrier, into a martyrs’ memorial.

In a letter to Defence Secretary R.K. Mathur, the 18 MPs said: “Save the Vikrant, convert it into a war museum ‘Shahid Smarak’, stop the scrapping process, stop it from being sent to Darukhana scrapyard, and reconsider and revive the Vikrant Shahid Smarak Project.”

The fate of INS Vikrant has swung between hope and despair since it was decommissioned in January 1997.

The Supreme Court May 16 allowed the Indian Navy to move the old vessel, once the pride of India, from Mumbai naval dockyard to Darukhana ship breaking yard.

This was after the government told the court that the Vikrant was in a condition of extreme obsolescence and deterioration and could no longer be repaired or refurbished.

Activist Kiran Paigankar had moved the apex court opposing the government move to relocate the Vikrant to the Darukhana ship breaking yard, and questioned the vessel’s safety in its new berthing place.

Paigankar sought the conversion of INS Vikrant into a museum. The court, issuing notice on his plea May 5, ordered status quo.

After the government pleaded that it only wanted to relocate INS Vikrant and not dismantle it, the court May 16 allowed it to be moved.

The IB Commercial Pvt Ltd bought INS Vikrant for Rs.63 crore in an auction in January 2014 after the Maharashtra government pleaded lack of funds to maintain it as a museum.