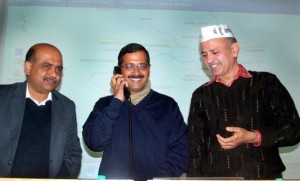 Kejriwal said: “…the chances of forming a government in Delhi are almost negligible. In such a situation, holding discussions does not make sense. We have decided that we will prepare for the elections (in Delhi).”

The announcement came after Kejriwal held a meeting with party legislators at his residence.

“We made a mistake, and I apologise for it,” said Kejriwal while referring to his stint as Delhi chief minister for 49 days. He quit in February.

The fledgling AAP made a stunning debut in last year’s Delhi assembly election, winning 28 seats in the 70-member House. The party had hoped to repeat its performance in the general election. However, it bagged only four Punjab seats in the Lok Sabha election and failed to win any parliamentary seat in Delhi.

Kejriwal said that the people of Delhi want him to form the government.

“Since the Lok Sabha elections have ended, I have been roaming around in Delhi where people have come up to me and said that we have already made a mistake, and that we should not repeat it,” Kejriwal said.

“They (public) asked us to form the government and provide them relief. Otherwise, they said, they will not forgive us,” he added.

The Aam Aadmi Party (AAP) Tuesday told Lt. Governor Najeeb Jung that it wants to form the government in Delhi and asked him not to dissolve the legislative assembly for a week.

Kejriwal said that they will hold a number of meetings in Delhi.

“…We will apologise to the people of Delhi and (seek) complete mandate so that we can form a government for five years,” he said.

“We will form a corruption free government,” he added.