A 47-day ban on trawling along Kerala coast that begins at the stroke of midnight Saturday due to the spawning season is likely to drive up fish prices. 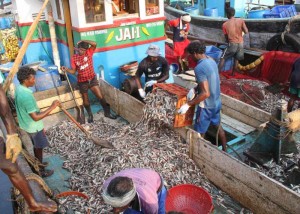 “The price of mahaseer fish is expected to cross Rs.1,000 a kilogram in the coming days, while the smaller ones like sardines, tuna and mackerel also are expected to go up by around 30 to 50 percent,” said a fish vendor in the state capital.

The ban on trawling has been an annual feature since 1988.

All fishing trawlers and mechanised boats are required to keep 12 nautical miles off the Kerala coast during the ban period during which they cannot cast their nets. The step is taken each year as part of conservation as this is the spawning season for many varieties of fish, including shrimps.

The ban, however, is not applicable for those who fish on canoes (the traditional Vallom fitted with a small motor).

The state government offers help in this period as free ration is provided to all those working on mechanized boats, peeling sheds and harbours.

“Whatever said and done, for two months, life is going to be tough as we are left with no work… ,” said a fishermen in Kollam.

Fish is one of the most important dishes in a majority of Kerala households.