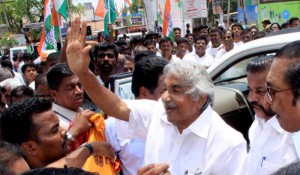 Whether the Congress wins or loses, one thing the party leaders in Kerala do not miss out on after the elections is washing dirty linen in public.

One of the early squabbles to break out within the party’s state unit is over the loss of four seats the Congress held, namely Thrissur, Chalakudy, Idukki and Kannur.

Powerful Congress leader P.C. Chacko and K.P. Dhanapalan were allowed to swap the seats of Thrissur and Chalakudy and the result did not bode well for the party, which conceded both the seats.

Now, Dhanapalan claims he almost cried to the high command, pleading against the swap of the seats.

“With tears in my eyes, I pleaded with the top leaders in Delhi that I be allowed to contest from Chalakudy. I also said that if I am not given Chalakudy, I will not contest this time. There was so much pressure on me from all quarters. Much against my wishes, Chacko was given my seat and I contested from Thrissur,” Dhanapalan told reporters.

More specifically, Dhanapalan claims that Chacko, who was chairman of the Joint Parliamentary Committee probing the 2G scam, worked his clout with the Congress high command in Delhi to get him the Chalakudy seat.

But Chacko himself believes that even if the seats had not been swapped, both of them would have lost anyway.

“What Dhanapalan said is his opinion. The reality would have been no different, even without the swapping of seats. There has been a huge erosion of votes of the Congress in Thrissur district,” reacted Chacko.

Thrissur district has become a perennial headache for the Congress leadership on account of deep-rooted factionalism that prevails among partymen in Thrissur, who were unhappy with Chacko.

At Idukki, the Congress was forced to switch strategy after it buckled under the pressure from the Church, dropping sitting MP P.T. Thomas and bringing in Youth Congress leader Dean Kuriakose.

Thomas was also the cause for infighting within some sections of the party’s district unit. But what really could have cooked Congress candidate Kuriakose’s goose was the unpopular Kasturirangan Committee report on Western Ghats.

The report created so much heat that the seat was won by Left-backed Joice George, who was fielded by the High Range Protection Committee formed to fight the Kasturirangan panel report.

Dean Kuriakose has now alleged that his allies and a section within his own party ditched him. However, state Congress president V.M. Sudheeran is tight-lipped about the post-electoral bickering.

“I do not wish to make any statements in public with regard to the election. The party is meeting to take stock and analyse the poll results on the 29th of this month,” Sudheeran states.

With Sudheeran, who assumed office February, already making it clear that indiscipline would not be tolerated, all that remains to be seen is how and when he will come down hard on leaders who played truant.

In the outgoing Lok Sabha, the Congress-led United Democratic Front (UDF) had 16 out of Kerala’s 20 seats, while in the recently concluded poll the tally has come down to 12.