Kerala government chief whip P.C. George raised the issue of free fall of rubber prices through a calling attention motion in the state assembly Wednesday to demand immediate intervention of the government. 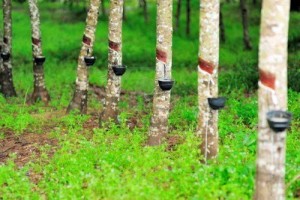 “Years back, anyone in Kerala who owned four acres of rubber could easily afford a Mercedes and today people who own the same acreage have only one option before them and it’s to commit suicide,” George said in the state assembly Wednesday.

George said, “The centre always has been playing truant and is interested in the welfare of just six tyre companies, when lakhs of farmers are driven to the verge of suicide.”

“Is this not done just to help the tyre companies? And even when the price of rubber falls, the price of tyres has increased drastically,” he added.

Responding to the fears George aired on the pitiable condition of rubber farmers in the state, Chief Minister Oommen Chandy fully agreed with what was said.

“The situation is such that international price of rubber is having a free fall. When the price of a kilogram of natural rubber in 2011 was Rs.245, today it’s just Rs.144 and the cost of production has mounted like never before,” said Chandy.

“In February, all steps were taken for market intervention by deciding to procure rubber from the open market by three state government agencies at Rs.2 per kilogram more than the daily market price, and also gave these agencies Rs.6 as handling charge. But with the election model code of conduct in place, we were unable to go ahead with it,” said Chandy.

George later demanded that a subsidy of Rs.5 per kilogram be provided to the state agencies which have been asked to procure rubber and prevail upon the centre to levy an import duty of 20 percent or Rs.34 per kg, whichever is less.

Kerala accounts for 90 percent of the rubber production in the country, and till a free fall in the prices started, rubber was the mainstay of many a household in the state. Costs of production have mounted and the price of latex and rubber wood have all fallen to very low levels, making rubber production unremunerative.