The parliamentarian, who is in New Delhi, said over phone that the newspaper delivery boy first saw the damage to his house and the posters early Saturday. 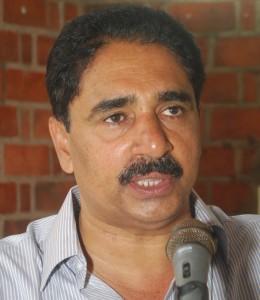 “Since I am in Delhi and my wife is in the state capital, our house that came under attack was locked,” he said.

“The window panes have been broken,” the MP said, adding his house staff have recorded their statements with the police.

“I am returning to Kollam June 10,” added Premachandran.

He said the posters on his house walls were threatening in nature, saying Premachandran is a deserter and a renegade, as he is now the disciple of Congress president Sonia Gandhi and Chief Minister Oommen Chandy.

The police have begun a probe into the matter.

Premachandran, a senior member of the Revolutionary Socialist Party (RSP), was an ally of the CPI-M led Left Democratic Front for the past three decades.

Ahead of the recent Lok Sabha polls, the RSP which was hoping to field its candidate from the Kollam Lok Sabha seat was peeved when the CPI-M announced the candidature of party politburo member and sitting legislator M.A. Baby.

Consequently, the RSP announced they were moving out of the LDF and would join the Congress led United Democratic Front.

The Congress decided to give the Kollam seat to Premachandran where the state witnessed a tough poll battle.

When the votes were counted, not only did Baby lose, he finished second in his assembly constituency at Kundara, prompting him to resign as a legislator, a decision which was turned down by his party.

The two factions of the RSP – the one that recently crossed over to the UDF and the RSP (B) led by State Labour Minister Shibu Baby John – are set to merge to form a single unit June 10.