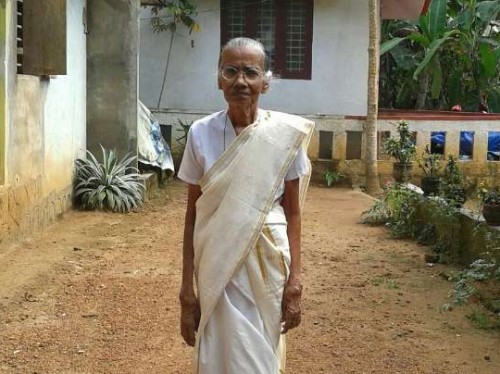 With even the saree becoming a rarity in Kerala, the traditional Syrian Christian women’s attire referred to as ‘chatta and mundu’ has virtually disappeared into oblivion.

The feature of this sartorial product is that it’s stitched in spotlessly white cotton cloth and, unlike the saree, there is not a single visible portion of a women’s body below the neck, barring the arms and hands. Chatta is more like a jacket, while the mundu (dhoti), unlike the one worn by a man, is elegance personified, especially at the back, where it is neatly pleated and folded into a ‘njori’.

When stepping out, women also wear a ‘kavani’, which is draped across their body and pinned at the back .

While the chatta and mundu is made of cotton, the kavani is generally of polyester material and is mostly off-white and with embroidery on it. It’s generally a status symbol.

Kunjamma Mathew, a 73-year-old homemaker in Changanacherry, has been wearing the outfit ever since she got married more than five decades ago.

“My mother-in-law was a tough personality and on the very first day I stepped in here, she said the dress code was chatta and mundu. But I could wear a saree if I stepped out. Till this day, I follow the dress code but there are not many women who wear it in my village,” Mathew told IANS.

Susy Thomas, a school teacher near Kottayam, had a teary look when asked about the dress style as her spinster aunt aged 80, who died a week ago, always wore it.

“I am 49 years old now and had always seen my aunt in that dress. Last month, my daughter, who is a college student, sought my aunt’s help to dress her up and four others for a programme in their college,” Thomas told IANS.

A Christian priest who did not wish to be identified said when he started his career more than 40 years ago, on Sunday mass if one looked at the women’s side, close to 80 percent were in the chatta and mundu, but today it has dwindled to less than five percent.

“Chatta and mundu is certainly a nice style, but to wear this is tough, to maintain this is even tougher, especially the washing element. Time is scarce for today’s women and hence all opt for easy to wear and easy to maintain dresses. So for all practical purposes, it wouldn’t be long when this becomes part of history,” beautician Julie Cherian told IANS.

But it appears not everything is lost as this has become a sort of a showpiece, with wedding planners trying to showcase this traditional dressing style by asking a few relatives of their client to dress up so. It’s not the elder ones they seek but the younger generation.

And last but not the least, some plush heritage hotels showcasing Kerala in its yesteryear splendour at time ask their women staff to dress up in the chatta and mundu. When they do, foreign women tourists go ga-ga, especially over the neatly pleated njori.