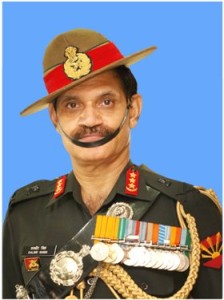 Lt. Gen. Dalbir Singh Suhag is set to be the next army chief with the cabinet clearing his name Tuesday, sources said.

The decision was taken at the last working cabinet meeting of the Congress-led UPA government, which demits office on Saturday, a day after the Lok Sabha election results are announced.

The defence ministry Monday recommended the name of the army vice chief to the government as the next head of the force.

The move came after the Election Commission gave the government the go-ahead for appointing the new army chief.

The Bharatiya Janata Party had opposed appointment of the new army chief at the “fag end” of the government’s tenure.

The prime minister will hold his last cabinet meeting May 17 morning, before handing over to the president the resignation of his government to allow the formation of a new regime.

An alumnus of Sainik School Chittorgarh, Lt. Gen. Suhag joined the National Defence Academy in 1970 and was commissioned in 1974.

He served as a company commander during “Op Pawan” in Sri Lanka, commanded the 53 Infantry Brigade that was involved in counter-insurgency operations in the Kashmir Valley and commanded the 8 Mountain Division in Jammu and Kashmir.

In 2012, he was put under a Discipline and Vigilance ban by then outgoing army chief Gen. V.K. Singh for a failed intelligence operation at Jorhat in Assam.

The ban was revoked by Gen Bikram Singh, when he took over as the army chief, paving the way for Suhag’s elevation as the Eastern Army Commander in June, 2012.