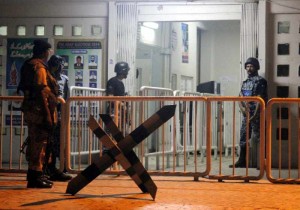 Sharif on June 2, wrote a letter to Modi that he was satisfied with the bilateral talks they held during his visit to India to attend Modi’s swearing-in ceremony, Dawn online reported.

In his letter dated June 11, Modi has expressed sorrow and condemnation over the loss of innocent lives in the senseless and barbaric terror attack at Karachi international airport.

Sunday night, an audacious terror attack was mounted at Karachi’s Jinnah International Airport, in which 23 people were killed including 10 militants.

A second strike followed Tuesday when the Airport Security Force (ASF) Academy’s camp near the Karachi airport came under attack from heavily-armed Taliban gunmen. The attackers managed to escape.

Besides mentioning the attack, Modi also said that the relationship between India and Pakistan defined by peace, friendship and cooperation would unleash enormous opportunities for the youth, secure a more prosperous future for people and accelerate progress across the region.

“I was also encouraged by our discussions on our bilateral relations and the convergence in our views,” he wrote.

“I was particularly delighted and honoured by your participation in the ceremony for the swearing in of the new government,” Modi said.

“I look forward to working closely with you and your government in an atmosphere free from confrontation and violence in order to chart a new course in our bilateral relations,” the Indian prime minister said.

“I thank you once again for the sari that you sent for my mother, a gesture that she has deeply appreciated,” Modi said.