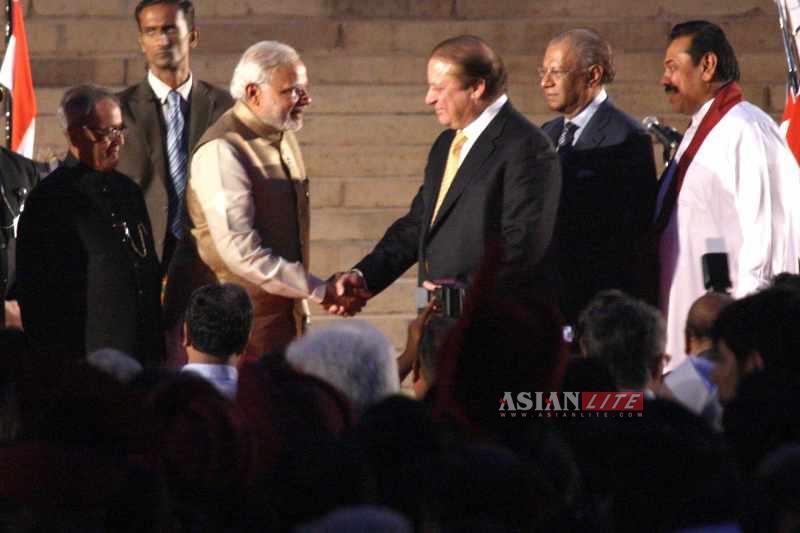 With the setting sun forming a magnificent backdrop, India got a new prime minister Monday as Narendrabhai Damodardas Modi, 63, took oath Monday in a 90-minute, open-air, business-like ceremony in the forecourt of Rashtrapati Bhavan, the presidential palace, attended by leaders of eight neighbouring countries.

Among the 4,000-strong guests at the epochal event were the Who’s Who of India – politicians, business honchos, cinema stars, inter-faith leaders – as well as diplomatic representatives from over 100 countries.

The oath of office and secrecy including pledge of allegiance to the Indian constitution was administered in Hindi to Modi – who wore an off-white kurta-churidar and a fawn-coloured Nehru jacket – by President Pranab Mukherjee.

Modi becomes India’s 14th prime minister, succeeding Manmohan Singh, who was at the event, along with his Congress president Sonia Gandhi. Modi is the first prime minister born in independent India — and the second from Gujarat.

Modi, who led the BJP to a historic victory in the Lok Sabha battle, is expected to move to his South Block office at 8 a.m. Tuesday.

Leaders of the members of the South Asian Association for Regional Cooperation countries who were present included Presidents Mahinda Rajapaksa of Sri Lanka, Hamid Karzai of Afghanistan and Abdullah Yameen of the Maldives as well as Prime Ministers Nawaz Sharif of Pakistan, Tshering Tobgay of Bhutan and Sushil Koirala of Nepal. Bangladesh was represented by parliament speaker Shirin Sharmin Chaudhury.

Mauritius Prime Minister Navinchandra Ramgoolam also attended the event. Their presence was a first for a prime ministerial inauguration.

Seconds after he took oath, the web site of the Prime Minister’s Office carried his message to the people promising to “script a glorious future for India”, one that is “strong, developed and inclusive” and that engages with the global community for the cause of world peace and development.

Modi said he was choosing his web site to deliver his first message to the people as he was a “firm believer in the power of technology and social media to communicate with people across the world” and a “very important medium of direct communication between us”.

There was a certain poignancy to the momentous occasion as the inauguration of a new prime minister happened 50 years after the death of India’s first prime minister Jawaharlal Nehru on May 27, 1964.

Along with Modi, a 45-strong council of ministers that included 23 of the cabinet took oath. There were seven women in the ministry, including six in the cabinet.

The setting was in many ways unique. Contrary to earlier occasions when the short ceremony was held in the stately Ashoka Hall of Rashtrapati Bhavan, Modi, true to his style as a communicator, chose to have it in the open in order to be able to accommodate many more people, perhaps the largest such gathering for any prime ministerial swearing-in in India.

The ceremony was watched live across the nation and in world capitals, on TV and web casts. Those on the move could get a real-time feed from the social media.

As soon as the ceremony concluded, Modi met the visiting leaders, starting with a warm handshake with Nawaz Sharif. The leaders then posed for a photo-op with the new Indian prime minister, the president and Vice President Hamid Ansari.

With the reins of government passing to Modi, the elite Special Protection Group (SPG) formed a protective ring around him as his party colleagues and others jostled to congratulate the new leader. In the background, his supporters chanted slogans of “Bharat Mata ki Jai” and “Vande Mataram”.

It was an amazing journey for the bespectacled and bearded Modi who sold tea in a railway station in Gujarat at a young age, before embracing politics, culminating in his becoming the leader of a country of 1.2 billion people.

As Monday’s event ended, the entire vista of Rajpath, from the lighted fountains of Rashtrapati Bhavan, down Raisina Hill, leading up to India Gate was awash with lights, signifying the start of a new era.