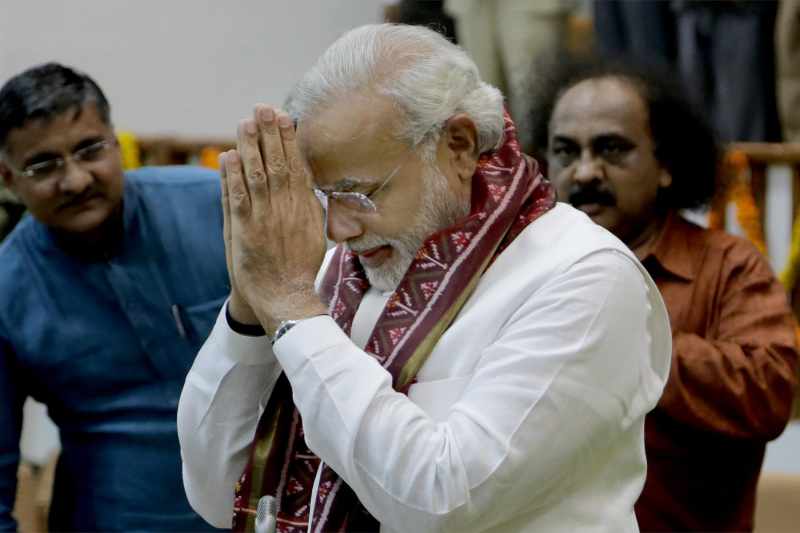 It would be history in the making, in more senses than one. A man who once helped his family make ends meet by vending tea at a railway station in between his classes, and who once wandered around the country to find his spiritual moorings, will take his oath as India’s 14th prime minister Monday in what would be a momentous occasion for India’s polity, its neighbourhood and its global outreach.

In the presence of government heads and leaders of eight countries, Narendrabhai Damodardas Modi, 63, will be sworn in by President Pranab Mukherjee at a grand, open air ceremony, attended by about 4,000 guests, including foreign diplomats, in the forecourt of Rashtrapati Bhavan, the presidential mansion, that will be watched throughout India and in international capitals.

Modi scripted history by getting the Bharatiya Janata Party a full majority in the Lok Sabha, the House of People in the Indian parliament, for the first time. After his meteoric rise from a party functionary to chief minister of Gujarat, where he ruled for 13 years, and then to prime minister-designate, Modi embarked on a foreign policy initiative that left even his bitter critics disarmed.

The heads of government of all SAARC countries except Bangladesh are attending the event in a signal that the countries in the neighbourhood were keen to script a new chapter in bilateral relations with a Modi-led government. It is seen as an indication of Modi’s rising stock as a leader in India and outside.

Sharif Saturday confirmed he will attend the oath-taking ceremony of Modi, a move that has created anticipation among people in both countries. Bilateral relationship has been bedevilled by what India views as Pakistan’s hesitation in taking action against the perpetrators of 26/11 Mumbai terror attack.

Modi, who got congratulatory messages from several world leaders, is apparently keen to hit the ground running in his foreign policy outreach by demonstrating his government’s keenness to improve relations with the neighbours and beyond.

Bangladesh will be represented by Speaker Shirin Chaudhury, as Sheikh Hasina will be away on an official visit to Japan, while Mauritius Prime Minister Navinchandra Ramgoolam will also be present, representing a nation with a large Indian ethnic population.

Official sources said it is the first time leaders from the South Asian Association for Regional Cooperation had been invited for the swearing-in of an Indian prime minister. Ambassadors and high commissioners of countries present in the capital are being invited, again in a first for an oath-taking.

Former presidents Pratibha Patil and A.P.J. Abdul Kalam, outgoing prime minister Manmohan Singh and Congress president Sonia Gandhi, and Bollywood celebrities including Amitabh Bachchan, Salman Khan and Lata Mangeshkar are among those invited for the swearing in of Modi and his council of ministers. All MPs are also on the guest list, the sources said.

Elaborate security arrangements have been made for the event with Delhi Police putting in place multi-layered security around the venue. The Indian Air Force will be on high alert with an “impregnable” air defence system having been put in place as the event is in the open.

The only spoilsport, besides the hot summer weather, could be a squall and dust storm, or even sudden rain.

But Rashtrapati Bhavan officials are keeping their fingers crossed.

“We’re hoping the weather will hold,” said Omita Paul, secretary to President Mukherjee, briefing the media on the arrangements.

It it the third time the swearing in of new prime minister will take place in the forecourt of Rashtrapati Bhavan, the earlier occasions being oath taking of former prime ministers Chandra Shekhar and Atal Bihari Vajpayee.