The only good news Friday was that the monsoon hit the coastal belt in Kerala.Regional Met director J.P. Gupta, said in Lucknow that the monsoon, after hitting the Kerala coast earlier in the day, was “on schedule” and in all likelihood will reach the eastern parts of Uttar Pradesh June 15.

Heat wave conditions intensified across north India Friday with the mercury hovering between 45 and 48.4 degrees Celsius at several places. No respite is due in the coming days though the monsoon hit Kerala, a day behind schedule.

Delhi was like a blast furnace Friday with the mercury soaring to 45 degrees Celsius, five notches above the season’s average, and making it the hottest June 6 in the last five years. The weekend might be worse as the temperature is forecast to touch 46 degrees.

The heat wave coupled with the scorching sun made people’s lives miserable and many chose to remain indoors, leaving the roads deserted during the day.

Extreme heat wave conditions continued in most parts of Uttar Pradesh, the country’s most populated state, with the mercury climbing steadily. Met officials said Mahoba, with a maximum temperature of 48.4 degrees Celsius, was the hottest. 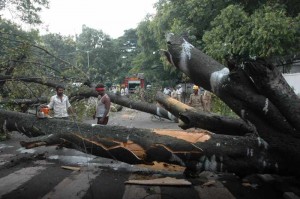 Power outages made life miserable for the common people. No power supply in many parts of Lucknow and other districts added to the people’s problems with power cuts extending from 8 to 10 hours. People at many places took to the streets to protest and, in some instances, even held power staff hostage.

In neighbouring Haryana, Hisar town sizzled at 46.5 degrees as heat wave conditions intensified over most parts of the state and Punjab. The temperature at most places ranged from 44 to 46.5 degrees, Met officials said.

Bhiwani recorded a high of 45.6 degrees while Ambala recorded 44.9 degrees.

In Punjab, Patiala was the hottest at 45.6 degrees while the Sikh holy city of Amritsar and industrial hub Ludhiana had a high of 45.5 degrees. All were four degrees above normal.

Chandigarh recorded a high of 44.5 degrees, five degrees above normal.

Met officials said that the weather will remain dry, sunny and hot in the coming days with the heat wave intensifying.

People preferred to remain indoors during the day time with the searing heat prevailing outside.

Met officials ruled out any relief from the heat wave in the next two to three days.

The hills of Himachal Pradesh were slightly better than the plains but the mercury soared here also.

“Temperatures across the state rose abnormally, remaining above average by two to seven degrees Celsius,” an official of the Met office in Shimla said.

According to him, Una town was the hottest place in the hill state with the maximum temperature touching 44.4 degrees Celsius, while Sundernagar in Mandi district was at 39.8 degrees, Dharamsala in Kangra district was at 35.4 degrees and Kalpa in Kinnaur district marked a high of 26.4 degrees.

The picturesque tourist resort of Manali recorded a high of 27.2 degrees Celsius.

Meanwhile, the Kashmir valley offered a refuge. As the temperatures continue to soar in the plains, the salubrious weather has been attracting tourists in large numbers.

Hundreds of tourists are thronging the hill stations of Sonmarg, Pahalgam and Gulmarg marked by soothing and pleasant weather.