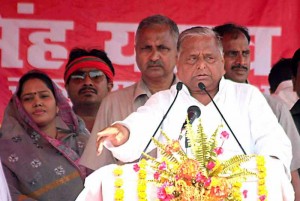 But Chief Minister Akhilesh Yadav remains the president of the state executive.

A senior leader said the action had the nod of Mulayam Singh Yadav, whose desire to send maximum number of MPs to the Lok Sabha was foiled by the BJP’s spectacular electoral showing.

An angry Mulayam Singh Yadav indicated two days back that he was in no mood to spare anyone after the party’s humiliating defeat.

The Samajwadi Party won just five of the 78 seats it contested in Uttar Pradesh. Two of the five seats were won by Mulayam Singh Yadav — from two constituencies.

As many as 36 state minister level party office bearers have been sacked and their VIP perks like police security and beacon light fitted cars have been withdrawn.

The chief minister Wednesday served showcause notices on eight district magistrates and 10 police chiefs for being missing from the office during duty hours.

While no senior party leader has openly spoken against the 41-year-old chief minister, many senior ministers are learnt to have told Mulayam Singh Yadav that his son had failed to inspire the cadres during the Lok Sabha campaign.

Party leaders have also blamed officers in the chief minister’s office for the rout.

The bureaucracy is likely to be rejigged in a few days.