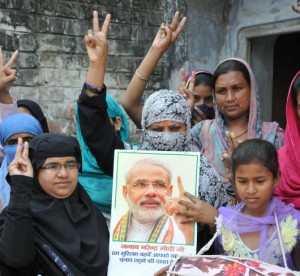 Muslim leaders and activists Friday expressed cautious optimism that the Narendra Modi-led government will work towards the economic development of the country which will benefit all.

Prominent Muslim leader Maulana Mahmood Madani told  that “the mandate of the people should be accepted with open heart. It is his responsibility to rise above the considerations of caste and creed and to work for the economic development of the country. He should ensure that there is no discrimination and that equal opportunity is provided to all”.

Abdul Noumani, spokesperson of the Jamiat Ulema-e-Hind, said a large number of Muslims, particularly the young, voted this time for the Modi-led National Democratic Alliance in the expectation of better economic opportunities.

“His main challenge will be to improve the economy. He will have to create jobs and curb inflation. He will also have to assure other countries that there will be peace in the country in order to attract investments from other countries,” Noumani added. He also pointed out that Modi has said that “he will protect the Muslim community from any danger”.

Dr. Zafarul-Islam Khan, editor of leading journal on minority affairs Milli Gazette, said he hoped that “with a good majority, the BJP will be more concerned with the economic development of the country. This should make their attitude more amenable towards the minorities as a good majority will make them more relaxed towards following their core agenda”.

However, Mohammad Adeeb, former Independent MP from Uttar Pradesh, said the BJP’s victory left “no hope for secularism in India. There will be fear in Muslims now and the sense of belonging will not be there”.

Khan also cautioned that the BJP regime may discriminate against the Muslim community although the ways of doing so were likely to be subtle. “They may deprive the minority areas of development,” Khan, who also heads the All India Majlis-e-Mushawarat, an umbrella organisation of several Muslim groups all over the country, said.