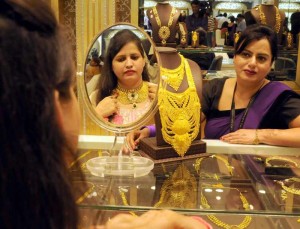 Market participants are yet again headed into a New Year with a bearish outlook on gold. This reflects the ongoing adjustments in the US interest rate cycle. It is the consensus view that the US Federal Reserve will start tightening monetary policy by June, which will push real interest rates higher and encourage further gains in the US Dollar even from current levels.

The US Dollar Index is trading close to 90, a significant technical resistance. Moreover, according to Deutsche Bank, if we value gold in real terms, relative to income, relative to physical assets and relative to the US equity market, then on average gold prices would need to fall towards $905 per ounce to bring its valuation against these various indicators back towards it long run historical averages.

The precious metal has been hammered over the last 18 months even though all the forecasts of rising US 10-year yields and US monetary tightening have not materialized. US Federal Reserve chief Janet Yellen has remained as accommodative as she could in light of the anemic recovery in the US labour market. But gold failed to rally as it was pricing in the QE (quantitative easing) taper and the eventual interest rate hike. That is why Currency Corner believes that all the bearish variables are priced into gold at current levels.

The relationship between the US equity risk premium and gold also points towards gold headed higher. The US equity risk premium (ERP) measures the difference between the expected rate of return on the S&P 500 and a risk free interest rate. As the premium declines, equities become a lower-risk-higher-return investment, a combination which is typically problematic for gold.

Last year witnessed the “Great Rotation” from fixed income to equities and the subsequent decline in the US equity risk premium. However, given the already significant decline in the ERP it may be prudent to assume that further declines will be harder to achieve. Indeed at 4.7 percent, the ERP has now fallen below its 2009-2014 average of 6.0 percent. The US equity market is by no means in the “bubble territory” yet although the rally has been a function of multiple expansion rather than earnings upgrades.

However, there exists a realistic risk scenario next year, namely the danger of a profit recession according to Deutsche Bank. A profit recession is defined as two consecutive quarters when S&P earnings per share (EPS) is down year-on-year at the same time real GDP growth is up. Oil price declines and surges in the US dollar are the typical causes of profit recessions and consequently an environment which could prove problematic for the S&P500 but supportive to the gold price.

Although, there is only a strong correlation between the growth of the US balance sheet and the gold price, monetary easing by the European Central Bank (ECB), Bank of Japan and the People’s Bank of China wo uld surely lend support to gold prices. We have already seen in recent weeks monetary action from the Chinese and Japanese policymakers.

The ECB QE is also just around the corner as is evidenced by the actions we saw by the Swiss National Bank (SNB) a few weeks back. The SNB took its main interest rate into negative territory to support the Swiss Franc’s peg against the Euro and prevent it from appreciating again st the Euro due to the ultra-dovish stance of the ECB.

Historically, the beginning of a US Fed tightening cycle is always preceded by volatility in the financial markets. This column expects the same to happen this time around as well. We will witness another big sell-off in gold towards $1050 per ounce in the next couple of months — most likely, closer to the May-June Federal Open Market Committee meet.

This would present a huge buying opportunity in gold especially if US wage and growth data in the following months fail to meet expectations. If the Fed sounds dovish after its first interest rate hike, the market would lose all faith in the central banks’ forecasting ability as gauged by the “Fed dots”. In this scenario, one can expect a rally in gold prices to $1400 per ounce.