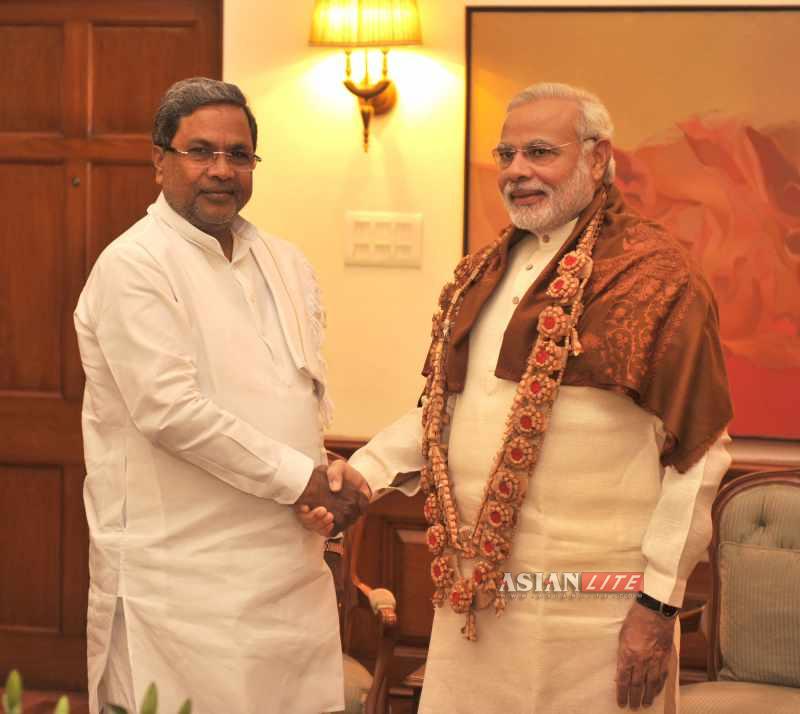 “Siddaramaiah called on Modi at the latter’s office and congratulated him for becoming the prime minister. He also discussed issues pertaining to the state, including the language policy and the Cauvery river water sharing with neighbouring states,” an official of the chief minister’s office in Bangalore said.

As Siddaramaiah could not attend Modi’s swearing-in ceremony at Rashtrapati Bhavan May 26 due to prior engagements in Bangalore, he decided to meet the prime minister on his current visit to New Delhi.

The chief minister sought Modi’s help in making teaching in mother tongue (Kannada) compulsory in unaided primary schools in the state, as the Supreme Court had recently quashed the state government’s decision to that effect.

Drawing Modi’s attention to the apex court’s observation that the medium of instruction should be decided by parents and not by the state government, Siddaramaiah urged him to convene a meeting of all chief ministers to discuss the issue of imparting primary education in the mother tongue.

“The prime minister expressed surprise over the Supreme Court decision and said he would take suitable action,” the official said, quoting the chief minister.

Siddaramaiah also asked the prime minister to continue with the Cauvery Monitoring Committee (CMC) in sharing of the Cauvery water by the state with Tamil Nadu, Kerala and Puducherry, and not accept Tamil Nadu’s demand to constitute the Cauvery Management Board as the inter-state case was pending before the Supreme Court.

The chief minister met Gowda at the Rail Bhavan and discussed the pending railway projects in the state with him.

Gowda, who hails from Karnataka and was elected to the Lok Sabha from the Bangalore North constituency, was the second BJP chief minister in the state from August 2011 to July 2012.

“Siddaramaiah has prevailed upon Gowda to speed up completion of various projects, including surveys for new lines, doubling of tracks and introduction of new trains across the state, especially shuttle services connecting Bangalore with satellite towns,” the official said.

The chief minister also called on veteran Congress leader Mallikarjun Kharge, who hails from Karnataka, and congratulated him on being appointed leader of the party in the Lok Sabha.

Kharge, who was Railway Minister in the UPA-2 government for a year since June 2013, was re-elected from the Gulbarga (reserved) constituency in the state.