Almost 10 months after submarine INS Sindhurakshak sank after an accident killing 18 sailors, it has been fished out of the water, official sources said here Friday.

The Russian-built Kilo-Class submarine was lifted out of its watery grave a couple of days ago using specialized equipment, hoisted on a barge and later towed for anchoring in a dry dock in the Naval Dockyard.

It will now undergo detailed investigations by naval experts to ascertain the cause of the Aug.15 early morning explosion and fire when it was undergoing some repairs.

The probe – supplementing a Board of Enquiry’s preliminary report – would attempt to find out whether there is any possibility to repair and make the 2,300 tonne submarine seaworthy. 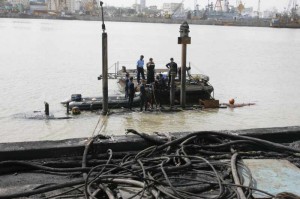 However, in view of the long time it remained sunken under the Arabian Sea waters and the damage it suffered due to the explosion and fire besides natural wear-and-tear, the second option is virtually ruled out and it may be officially decommissioned, according to sources.

Later, a decision would be taken by the Indian Navy of giving it for scrapping.

The salvage operation – reportedly costing Rs.2.40 billion – was started in February this year and successfully completed by Resolve India, the Indian subsidiary of an American company, Resolve Marine Group.

The five-month-long salvage operation included dredging the seabed around the tragedy site to at least eight feet to enable the special salvage vessels and equipment reach the submarine.

Commissioned in 1997, INS Sindhurakshak had once hosted then president A.P.J. Abdul Kalam who created history by becoming the first head of state and the Supreme Commander of Indian armed forces to sail in a submarine Feb 13, 2006.

The announcement came a day before new Defence Minister Arun Jaitley is due to visit the Western Naval Command here Saturday.