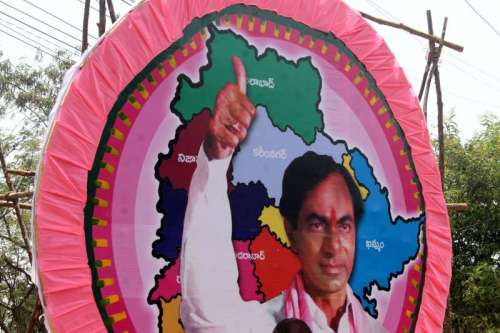 The Telangana sentiment is likely to help the Telangana Rashtra Samithi (TRS) retain the Medak Lok Sabha seat, which will see a by-election Saturday.

The sentiment, which helped the TRS to form the first government in newly created Telangana, appears to be still strong in the constituency, which was once represented by late prime minister Indira Gandhi.

The general mood among the voters is that the TRS, the ruling party, alone can steer the state on the path of development.

The presence of the BJP-TDP combine’s Jagga Reddy, who once opposed the formation of the new state, only seems to be helping the ruling party.

The seat was vacated by party president K. Chandrasekhar Rao after he took over as the chief minister.

Medak, the native district of KCR, as Rao is popularly known, has been a
stronghold of the party since he floated it in 2001.

In recent elections, KCR was elected both from Medak Lok Sabha and
Jagityal assembly segment, a part of the parliamentary constituency.

As the TRS stormed to power and he was made the first chief minister of the new state, he retained the assembly seat and resigned from parliament, necessitating the by-election.

With all seven assembly segments in the parliamentary constituency held by TRS, the pink party may have a smooth sailing.

The first by-election after the TRS formed the government is expected to be a test of its popularity. Though the government has completed 100 days, the ruling party feels it is too short a period to judge the performance of a government and that too in a new state.

The voters are also ready to give more time to the government.

KCR has promised to implement the decisions taken during last three months from Dussehra next month.

“We have just started working. We inherited many problems from the past and from the rule of Andhra leaders. We stand by our word and will fulfill every promise to deliver a (golden) Telangana,” he told an election rally Wednesday.

The TRS has fielded K. Prabhakar Reddy, a businessman and a close aide of KCR with assets of more than Rs.68 crore.

Not much has changed since the TRS chief bagged the seat by defeating
Shravan Kumar of Congress by 3.97 lakh votes, the highest in undivided Andhra Pradesh and in the history of Medak constituency.

The constituency has over 15.36 lakh voters. Though 14 candidates are in the fray, the main contest is among the TRS, the BJP-TDP combine and the Congress. All leading candidates are from influential Reddy community.

“The BJP and Congress are fighting for the second position. They will lose their security deposit,” said state minister Harish Rao, who represents Siddipet, one of the seven assembly segments.

The BJP sprang a surprise by fielding Jagga Reddy, who had not even quit the Congress when his candidature was announced.

The BJP choose him as he is a bitter critic of KCR and had openly taken on the TRS chief in his stronghold.

The TRS has launched a scathing attack on Jagga Reddy for. He was a close aide of then chief minister Kiran Kumar Reddy and on many occasions had opposed the bifurcation of Andhra Pradesh.

The BJP is seeking votes to strengthen the Modi government. “The BJP
government at the centre alone can help Telangana to develop. One more
seat in the Lok Sabha will strengthen its hands,” said BJP state president G. Kishan Reddy.

Congress candiate V. Sunitha Lakshma Reddy, a former minister, appears to be trailing behind as the party has still not recovered from the drubbing it received in the general election.

The division in Congress ranks has further weakened her position.

Of the 17 Lok Sabha seats in Telangana, the TRS had bagged 11. The Congress clinched two seats while the TDP, BJP, YSR Congress and MIM won a seat each.