An uneasy calm prevailed at the Golden Temple complex here on the 30th anniversary of Operation Bluestar Friday following a clash between radical Sikh activists and SGPC task force volunteers in which 10 people were injured.

Swords and sticks were freely used as scores of men from both sides chased one another outside the Akal Takht building within the complex, home to the holiest of Sikh shrines – Harmandir Sahib.

People with bleeding injuries and ground stained with blood could be seen later at the site of the clash. 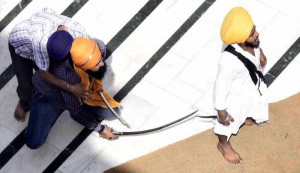 Many people scurried inside buildings and other areas of the complex to save themselves.

The hundreds of devotees in the temple were not affected as the clash remained confined to a small portion of the complex.

The radicals were brandishing swords and other traditional weapons and raising pro-Khalistan slogans inside the complex.

The clash occurred just after the religious ceremony to commemorate the 30th anniversary of Operation Bluestar ended Friday morning.

“The radical elements tried to take control of the public address system and shouted slogans. This was opposed by the SGPC (Shiromani Gurdwara Parbandhak Committee) volunteers, which led to a violent clash,” said a police officer outside the shrine complex.

Police officers, in plain clothes, could be seen trying to pacify agitated members from both sides.

Media persons were also manhandled. Tension continued to prevail till the afternoon. However, no uniformed police personnel was present inside the complex.

The SGPC and the Akal Takht are likely to order a probe into the violence.

The ruling Akali Dal condemned the violence saying the sacrilege was committed at the Sikh holy shrine. Describing the incident as “unfortunate”, Akali Dal MP Prem Singh Chandumajra told reporters in New Delhi that action could be taken after a probe into the matter.

Punjab Chief Minister Parkash Singh Badal strongly condemned the incidents of violence and asserted that nobody would be allowed to disturb the hard-earned peace and harmony in Punjab.

Amritsar MP and former chief minister Amarinder Singh said that he was “shocked” at Friday’s incident.

The Bharatiya Janata Party, which runs an alliance government with the Akali Dal in Punjab, sought action. “The SGPC and Akal Takht should punish the guilty,” said Punjab BJP president Kamal Sharma.

Security personnel were deployed outside to control any untoward situation.

The rush of devotees increased towards the evening, signalling normalcy.

Shops in the vicinity of the shrine remained closed Friday following a shutdown call given by radical Sikh organisation Dal Khalsa. Police detained several activists for forcing the closure of shops.

“The area around the Golden Temple complex had a curfew-like look. The situation looked tense,” said a local media person who witnessed the clash.

“The incident at the shrine is unfortunate. The Dal Khalsa had nothing to do with it,” said Dal Khalsa leader Kanwarpal Singh.

Heavily armed terrorists, led by separatist leader Jarnail Singh Bhindranwale, were flushed out of the Golden Temple complex by the Indian Army in Operation Bluestar in June 1984. The then prime minister Indira Gandhi had ordered the army operation.

Punjab witnessed a bloody phase of terrorism between 1981 and 1992 as separatists demanded a Sikh homeland — Khalistan (land of the pure). The terrorism phase left over 25,000 people dead, including hundreds of security personnel.