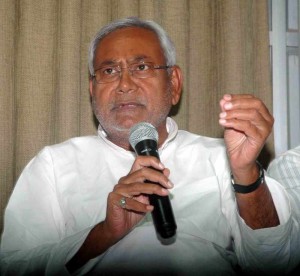 Bihar Chief Minister Nitish Kumar resigned Saturday, taking moral responsibility for the rout of his Janata Dal-United in the state in the general elections.

“I led the party’s campaign. I take moral responsibility for the election result,” a visibly despondent Nitish Kumar told the media persons.

He submitted his resignation to Governor D.Y. Patil after the JD-U won only two of the 40 Lok Sabha seats from Bihar. In 2009, it won 20 seats in alliance with the BJP.

Nitish Kumar made it clear that he has not recommended the dissolution of the 243-member Bihar assembly. He said that meeting of the legislature party has been scheduled for Sunday.

“We did not get the expected support…(and) there is no doubt that the mandate is for the BJP,” said Nitish Kumar, who has been in the saddle since Nov 24, 2005, and won a second term in the 2010 assembly elections.

He added that he has not seen this kind of polarisation in Indian politics. “I hope that the new (central) government keeps the promises made during the campaign.”

Ashok Kumar Singh, a businessman, said: “It is going to be a big set-back for Bihar, which is on development track under Nitish Kumar. I never expected it.”

Anant Kumar, a student, said he was shocked at Nitish Kumar’s resignation.

“I think he was a victim of caste and communal polarisation in polls as he was only talking about development and asking people to support him for his work,” Anant said.

Since the Janata Dal-United fared poorly in the Lok Sabha election, there has been intense speculation the Nitish Kumar government may fall as party legislators would desert him.

Another setback for Nitish Kumar was that then JD-U bagged only one of five assembly seats where by-polls were held along with the Lok Sabha polls. The RJD bagged three seats and the BJP took one.

In the assembly, the JD-U has 118 legislators while the BJP has got 91. RJD is placed third with 22 lawmaker, Congress has 4 and others are 8.

Nitish Kumar, an engineer by education, has been an MP for six terms and has also served as a union minister.

“As chief minister has lost the confidence of people, he should resign with immediate effect owning moral responsibility for the debacle of his party in the state.”

Barely two days back, BJP’s ally LJP chief Ram Vilas Paswan said that after result of the Lok Sabha elections, the Nitish Kumar government would fall as dozens of its legislators would desert him and there will be mid term-polls to the state assembly in November 2014.